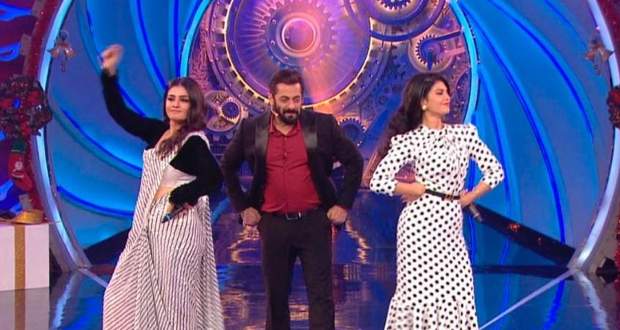 Suddenly, Salman comes there and greets the audience and the ladies.

The ladies give a quiz on the current situation inside the house while praising Salman.

They do the task of seeing who knows Salman better while Jacqueline flirts with him.

Salman makes them do each other's hook steps.

Housemates wish him a very happy birthday after which they do the cake cutting.

Salman tells Rakhi Sawant that she is trending and shows the housemates a clip of Ronit Ashra.

Salman gives the housemates a task in which they are given a plant with a protest slogan written on it and write the name of the housemate they think it suits the most.

Inside the house, Nakki Tamboli reveals to Vikas Gupta that Arshi stole coffee from his bedside table.

Shehnaz makes pairs of housemates and tells them to create a hook step for the Moj track and the most liked pair on the Moj app will be announced Moj starts next week.

Salman tells Rahul Mahajan, Eijaz, and Abhinav Shukla to stand behind their cake and tells them that there is a note inside their cake which determines whether they are safe or not from this week's eliminations.

Further, he tells them to eat the cake without using their hands and it is revealed that all three of them are safe.

Inside the house, Vikas tells Arshi to give him back the coffee that she stole but she denies doing it after which she wakes him up in the middle of the night.

Vikas throws water on her.