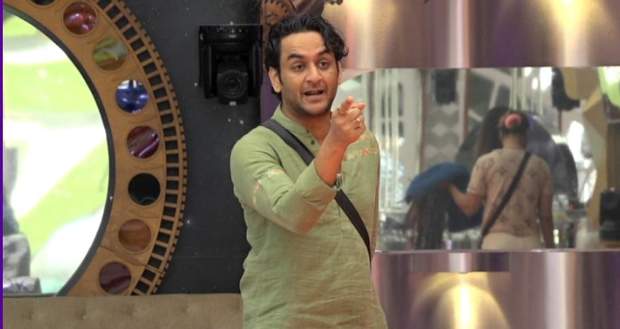 The yellow team goes inside while Abhinav Shukla brings out a bicycle from the pool and fixes it while telling Rubina and his team members to protect it from the yellow team.

The yellow team come outside and struggle to get the bicycle back from the red team.

Aly Goni tears Abhinav's picture and they get into a physical fight while Aly swears at him.

Rubina talks in support of Abhinav while Aly tells jer to not blindly support her husband.

Bigg Boss asks Vikas Gupta if any team has an intact bicycle while he answers no.

Rubina fights with Vikas saying that their cycle is complete while Bigg Boss announce that no one will get the rewards.

Housemates argue while Abhinav ignores everyone and repairs the bicycle.

Vikas helps Abhinav and they finally manage to make the bicycle usable and Nikki rides it.

Later, Rakhi Sawant tells Rahul Vaidya that he is being targeted for Aly's fights and is getting picked during the nominations saving Aly.

Bogg Boss Day 117 starts with everyone waking up to the song 'You are my soniya'.

Vikas says that Arshi left pit the Daal out the whole night which gets spoiled and argues with her.

Later, Nikki puts the used bowl in the sink and goes while Vikas tells her to wash it which sparks an argument between the two.

Rubina reads from the Bigg Boss Rulebook about the Amway Nutralite Chawanprash contest in which Rahul and Rubina are the sellers.

Rahul wins the task gets a gift hamper from Amway.

Later, Rakhi talks to herself in the mirror about Abhinav and later cuts Abhinav's underwear to pieces.

She later throws a piece of orange at Abhinav after which he talks about it to Rubina and Nikki.

After midnight, Arshi talks about Vikas' real reason for revealing his details to the national television to Aly amd Rahul.

She says that he used to beg her to call his family members and send him recordings.

Upcoming Bigg Boss 14 episode update: Housemates to do actions in a loop.