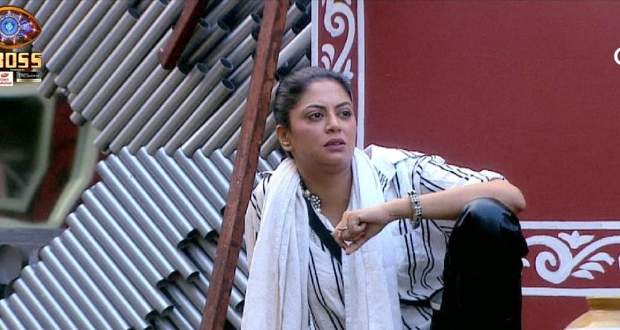 Aly says that it will happen in the task and Rubina Dilaik rebukes him.

Rubina sparks up an argument with Jasmin and they accuse each other of sugar-coating their words.

Pavitra Punia questions Eijaz Khan for disclosing her lack of eating to Kavita.

Bigg Boss announces that the next location up for discussion is the Bathroom area.

Both the teams strategize their speeches.

During the task, Nikki Tamboli reveals in front of everyone that Eijaz urinates on the toilet seat.

Kavita Kaushik tells Nikki to not get personal as it is a task.

After the buzzer, Jasmin gets to the bathroom area.

Bigg Boss announces the end of the task tells Kavita to bring out the certificate from the storeroom.

Afterward, Bigg Boss tells her to sign the name of the team which possesses the most locations and declares them a winner.

Kavita signs Jasmin's name and Bigg Boss announces the contestants of the winning team as nominees for captaincy.

Abinav Shukla and Kavita clear their misunderstanding regarding their friendship.

Big Boss Day 56 starts with everyone waking up to the song 'Hum hai rahi pyaar ke.'

Kavita jokes with Abhinav telling him to not make black coffee for her.

Rubina berates Kavita for not understanding Abhinav's courtesy which leads to an argument.

Bigg Boss announces Jasmin, Rahul Vaidya, and Nikki to discuss and conclude with Kavita and Aly to choose the captain from the former three.

They conclude that Rahul and Nikki are the final contenders as Jasmin has already been a captain in the past.

Nikki refuses to give her approval to let Rahul become the captain.

Bigg Boss asks them to give their answer.

Everyone says that they could not agree on the captain.

Bigg Boss announces that the task is stopped and that there will be no captain this week.

Pavitra and Rubina mock Nikki and spark up a fight with her.

Nikki gets ticked off by Rubina's fake pity.

Rubina reads from the Bigg Boss rulebook and informs others that they have to create jingle tunes for Ching's chutney using their taglines.

Nikki will choose the winner.

Team A consists of Jasmin, Aly, Rahul, and Kavita while Team B consists of Eijaz, Pavitra, Rubina, and Abhinav.

Nikki announces Team A as winners and gives them a ching's gift hamper.

Rubina confronts Kavita when did she say that Jasmin is arrogant.