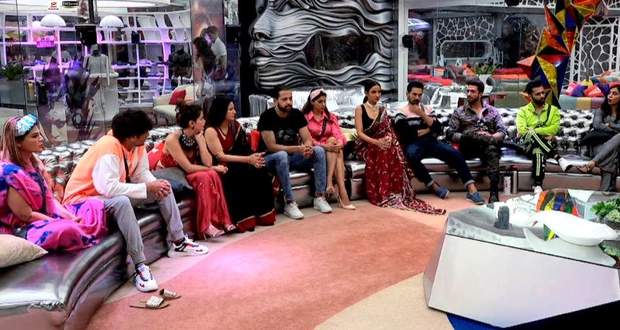 Vikas Gupta questions Arshi Khan why she took his personal item without asking him and initiates a fight with him.

Further, Vikas has a breakdown and reveals about his relationship with a former male contestant of Bigg Boss before he was in the show.

(Bigg Boss Day 87) starts with everyone walking up to the song 'She move it like'.

Nikki requests Vikas to give her some coffee but he instead sings a song.

Rahul Vaidya talks with Vikas while Nikki comes there and he starts teasing them both.

Bigg announces that it is time for nominations task and that Vikas cannot be nominated as he is the captain.

Bigg Boss one by one calls each contestant and asks them to give two name whom they want to save from nominations while telling them to not reveal what happened in the confession room to others.

However, Nikki reveals details to Aly and Bigg Boss questions Aly in the confession about what Nikki revealed to them. Aly goes outside and tells Nikki that she is in trouble.

However, Bigg Boss reveals that Nikki and Aly broke the rules and as a punishment declares that everyone is nominated for this weeks elimination except Vikas.

The housemates start fighting with each other while Arshi blames everyone saying that they have taken Bigg Boss lightly.

Rakhi feels sad that no one took her name while the housemates try to justify their actions.

Rubina Dilaik reads from the Bigg Boss rulebook about the MPL sponsorship task in which they have to play darts and cricket and the winner will get a luxury budget amper.

Rahul V. wins the task and he chooses Aly, Nikki, Rakhi and Abhinav to share the luxury items with.

The house ladies accuse Nikki of not working enough in the kitchen area which creates an argument between them.