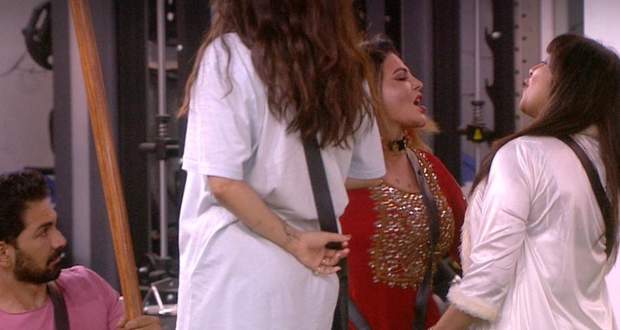 Bigg Boss 14 28th January 2021 Written Update: Housemates to be in a timeloop

Today's Bigg Boss 14 28 January 2021 episode starts with Nikki Tamboli telling Rakhi Sawant that she herself distanced Abhinav Shukla from her.

Suddenly, the lights start flickering all around the house while a whiteboard is seen upon the lifting up of the blinds.

Bigg Boss announces that they will be doing a task named time loop after which Rubina Dilaik reads from the Bigg Boss rulebook that they have to follow the activities written in the whiteboard when the tape rewinding sound comes.

Rubina gets tensed cause she has a phobia of water while Arshi Khan hides the brooms as Nikki has to sweep the living area as her activity.

Rahul Vaidya tells Nikki that her brooms are hidden while she asks him who hid it but he doesn't reveal the name.

Bigg Boss Day 118 starts with everyone wakes up by the tape sound and everyone does their morning time loop while Abhinav goes against it and roams in the garden.

Nikki doesn't let Rahul make tea and demands the name from him which sparks a fight between them.

The tape sound comes indicating the end and Bigg Boss announces that Abhinav is out of the task and thus becomes the time king.

In the second time loop, Abhinav doesn't let Rakhi do his massage to prevent her from completing her activity.

In the end, Abhinav outs Rakhi from the task and she says that she'll not leave him and starts following him around.

At the end of the third round, Arshi and Nikki get into an argument while Abhinav outs Devoleena Bhattacharjee and Rahul from the task.

Aly Goni tells Arshi to not glare at her and goes.