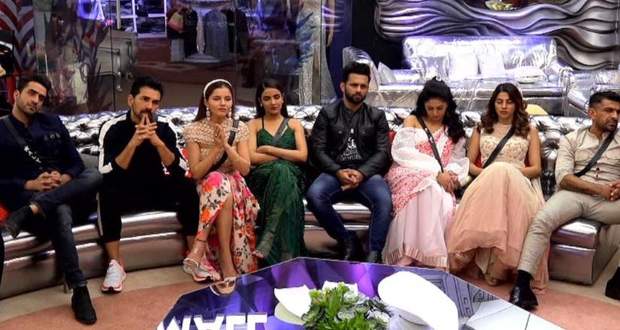 Bigg Boss greets the housemates and tells them that today's mantra is 'Bada, Chada Ke Baja'.

Salman informs them that the contestants who are blamed most by votes of housemates will be seated on the villain seat.

He informs that the most blamed contestants are Rubina Dilaik, Jasmin Bhasin and Nikki Tamboli.

He seats all three one by one and asks other contestants what do they want to blame them for.

Nikki is last to sit on the villain seat and reveals that she uses the word 'Nalla' in the context of Useless as it means the same in the south.

Salman tells Nikki to stamp X-marks on the faces of contestants who are not being seen.

Salman tells Rahul Vaidya to bring props from the storeroom and tells them that it represents the house of Bigg Boss.

He tells the contestants that the capacity of the house is 4 and according to them Rubina is a conformed contestant.

He tells housemates to discuss together and give him three names apart from Rubina.

Afterward, Salman reveals that the next is going to be the finale week and only four contestants will be the finalists.

He reveals that the rest will be evicted.

Salman informs them that the evictions will be throughout the day starting from today.

Salman informs them they are going to roast each other and Nikki, Eijaz, Pavitra, and Abhinav are judges.

A clip of them preparing the scripts for the roasting while Rubina and Kavita get into a fight for lying about her words.

Kavita drags Abhinav into the fight and Abhinav states to not drag him into their problems.

The clip ends and Salman tells Rubina to start the roasting session.

Kavita and Rubina get the most votes.

He states that he will reveal the evicted contestants name tomorrow.

He bids the audience goodbye.

Upcoming Bigg Boss 14 episode update: housemates to be seen in the characters that made them famous.