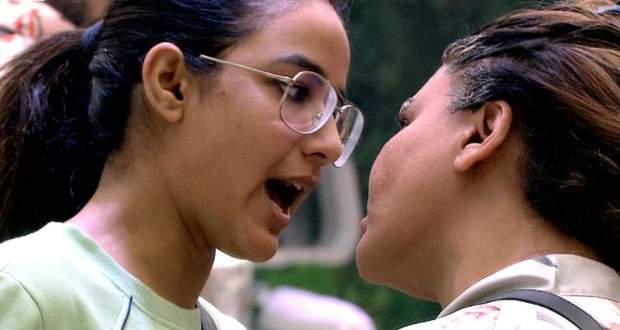 Arshi Khan didn't do the dishes on time which created a ruckus between members of the house after which she started doing the dishes.

Jasmin Bhasin revealed to Arshi that the coffee is in Rakhi Sawant's bed while Vikas Gupta goes to her and tells her about it.

Rakhi gives him a small amount of coffee to distribute to them.

She comes there and says that she hopes the person who spies on her breaks her leg and dies which angers Aly Goni and he fights with her.

Rakhi acts weirdly with Jasmin and tries to get her to fight but she goes to the garden area.

Rakhi goes to the bedroom area and spits into the coffee.

Later, Rahul Vaidya comments on Arshi and initiates a fight with her while she accuses him of body-shaming her.

Arshi cries in the bedroom area while Rahul Mahajan confronts Rahul V. who reveals that he did not body shame her and that she is twisting his words.

Nikki Tamboli and Jasmin play football with Rakhi's chicken head and destroy it.

Further, Jasmin puts the chicken head over Rakhi while she holds her nose saying it is injured and starts banging her head on the table.

Rakhi keeps on crying while the housemates try to console her.

Later, Sonali Phogat and Vikas berate Jasmin while she says that Rakhi hit her head on the glass table and hurt her nose purposefully.

Sonali pacifies Rakhi while Rakhi says that she will do whatever she wants to do if Bigg Boss doesn't take any action.

Later that evening, Bigg Boss announces that Rakhi did get hurt and says that they are not punishing Jasmin as it was not her intention.

Bigg Boss further says that they are very disappointed in Jasmin which hurts her and she starts crying.

© Copyright tellybest.com, 2020, 2021. All Rights Reserved. Unauthorized use and/or duplication of any material from tellybest.com without written permission is strictly prohibited.
Cached Saved on: Tuesday 2nd of March 2021 11:07:49 PMCached Disp on: Wednesday 3rd of March 2021 02:02:59 PM