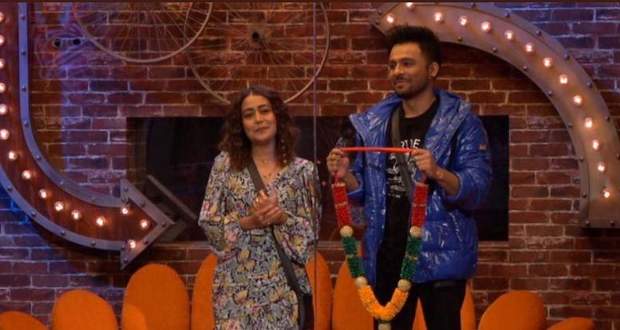 A clip of housemates in their character which made them popular is shown.

Salman greets the housemates and introduces the celebrity panel to them.

The panel begins their intense confrontation for each contestant one by one with a little bit of humour here and there.

Salman asks them who they would like to see in the top 4 while all the four panellists answers consist of Rubina Dilaik, Rahul Vaidya and Eijaz Khan.

Salman once again greets the housemates and tells Jasmin Bhasin and Rubina to sit on a chair with a box of heart in front of it.

He tells the other contestants to come one by one and fill the heart with black water of the contestant they think who has more hatred in it.

Rubina's heart is more filled with water and Salman states that she does foster hatred in her heart.

A clip of Vikas Gupta, Rakhi Savant, Manu Panjabi, Rahul Mahajan, Aashi Khan and Kashmira telling the viewers that they are coming is shown.

Salman reveals that they are the new contestants of Bigg Boss 14.

The siblings enter the Bigg Boss house and reveal to contestants that she is married.

Neha says that she sees a potential sister-in-law in the three bachelorettes in the house who are Pavitra Punia, Nikki Tamboli and Jasmin.

She makes all three of them do tasks and at the end she picks Jasmin.

She makes both of them wear a flower garland while Jasmin says that she is not ready to be a sister-in-law.

The caller of the week asks Rahul why he targets Abhinav Shukla to which Rahul clarifies by giving his answer.

Salman recites the names of nominated contestants and reveals that Bigg Boss will tell them the eliminated person name.

Bigg Boss opens the front door and tells the contestants to get used to it.

Bigg Boss further asks them to give their opinion on who they want to kick out by kicking a ball with their chosen contestants photo to the front door.

Bigg Boss reveals that as per the public voting Pavitra has been eliminated.

Pavitra bids everyone goodbye and everyone and leaves while Eijaz Khan gets emotional.