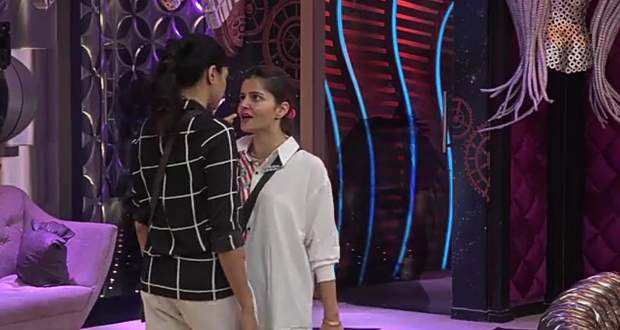 Today's Bigg Boss 14 2 December 2020 episode starts with Jasmin Bhasin voicing her emotions of feeling better after Aly Goni's entry to Big Boss house while other housemates are discussing the task.

Jasmin tells him to stay but he refuses which sparks an argument between them.

Kavita Kaushik tells Bigg Boss that she wants to step away from the couch as she does not want to listen to Jasmin-Aly's talk.

Rubina Dilaik rebukes her for not following the orders which sparks a fight.

Aly announces that he is leaving the house. Bigg Boss tells him to exit through the front gate.

Bigg Boss Day 61 starts with everyone waking up to the song 'Prem Ki Naiya'.

Nikki Tamboli gets excited watching the setup in the garden area.

In the task, each contestant will have to get a seat in the boat in the garden area and the last contestant to stay on the boat will become the second finalist.

Eijaz Khan will be the coordinator of the task as he is already a finalist.

Kavita is out in the first round.

Bigg Boss announces that the task is halted for today.

A clip of the same day where they are talking about unnecessary things is shown.

Kavita initiates a fight with Rubina by telling her to meet her outside of the Bigg Boss house.

Kavita leaves through the front door and doesn't come back.

The door closes around midnight.

Upcoming Bigg Boss 14 episode update: Jasmin out of the house for medical reasons.