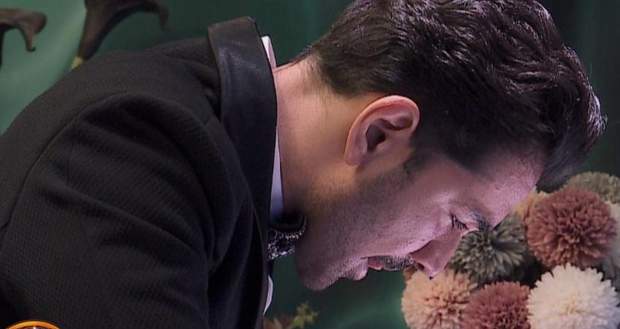 He says that the housemates did a task in which they chose a contestant who did wrong amd the clip of housemates doing the task is shown.

Abhinav Shukla chooses Rakhi Sawant and says that he is hurt by her actions and has broken his heart after which he says that he doesn't want this type of entertainment and wants to go home.

He goes into the washroom area and cries while Rubina Dilaik and Nikki Tamboli console him.

Rakhi justifies her actions to the housemates while Vikas Gupta tells Abhinav that Arshi Khan twisted Rubina's words and made it wrong.

Rakhi apologies to Abhinav while Vikas says that Arshi's plan was a success as she wanted them to separate because of the attention they were getting.

Salman greets the housemates and asks them if they missed him last week to which all reply approvingly.

Salman reminds then that Vikas, Nikki, Rahul Vaidya and Devoleena Bhattacharjee are nominated for elimination.

He asks Rubina how Vikas was wrong in the bicycle task.

Salman asks all the housemates if Rubina's support changes according to the person in front of her amd her relation with them.

They talk about the incident of Rakhi pulling the strings of Abhinav's trousers.

Salman asks who gets the most benefit from Rakhi's entertainment tactics and most of the answers are of Abhinav.

Salman tells him to not make a big deal out of it and that he has started looking endearing due to Rakhi's interactions.

Salman asks Nikki what she did to change her behaviour and tells her to remember his advice.