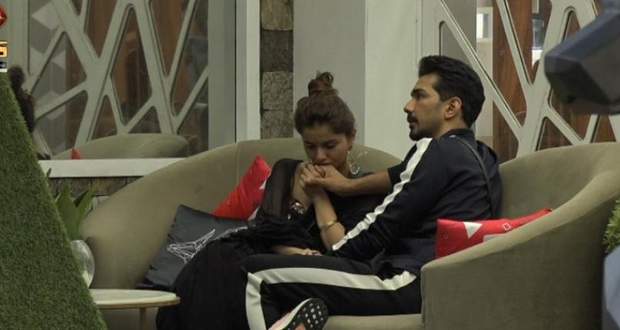 Today's Bigg Boss 14 30 November 2020 episode starts with Abhinav Shukla and Rubina Dilaik getting into an argument for making paranthas.

Abhinav pranks Nikki Tamboli at around midnight while others rebuke him for waking them up.

Big Boss Day 59 starts with everyone waking up to the song 'Chunri Ke Piche'.

Rubina tells Abhinav to not do these kinds of things again as it doesn't suit him and tells him to not become Jaan.

Bigg Boss announces that the Bigg Boss 14 contestants will be against each other in the race to be in the top 4 list.

Contestants will be eliminated by the public's votes and by various tasks done thereafter.

In the first task, contestants will get a chance to steal the immunity stone from Rubina which will secure them a place in the top 4 if they reveal their darkest and deepest secret.

This will happen in five rounds and the winner for each round will be selected by the housemates only.

The first one is Rubina who reveals that she and Abhinav were going to get divorced in November 2020 if they would not have been in Bigg Boss.

Eijaz Khan goes next who reveals that he was molested in his childhood and apologises to his father for not sharing it with him.

Bigg Boss tells Rubina and Eijaz to read out their secrets to the other contestants to let them decide which one they want to choose.

Kavita hugs Eijaz after they reveal their secrets.

Everyone chooses Eijaz after which Bigg Boss tells him to put the Immunity stone on the podium with their name on it.

Abhinav goes next and reveals that he went through depression and bankruptcy for two years when his first film went flop.

Bigg Boss tells them to choose and they stick with Eijaz.

In the third round, Jasmin reveals that she had tried to end her life by overdosing due after facing so many rejections.

Eijaz still is chosen by the majority of votes.

In the fourth round, Nikki Tamboli reveals that she was kidnapped and looted by the goons of the director who gave her first assignment.

Eijaz is still chosen by the majority.

Lastly, Kavita Kaushik goes and reveals that her 65-year-old maths tutor tried to take advance of her when she was just 11 years old.

Eijaz still has the majority at the end and wins the Immunity stone.

Bigg Boss announces that Eijaz has become the first confirmed contestant in top 4 and the rest are nominated for eviction.

Jasmin confronts Abhinav and calls Rubina clever which sparks an argument between them.

© Copyright tellybest.com, 2020, 2021. All Rights Reserved. Unauthorized use and/or duplication of any material from tellybest.com without written permission is strictly prohibited.
Cached Saved on: Sunday 17th of January 2021 06:10:33 AM