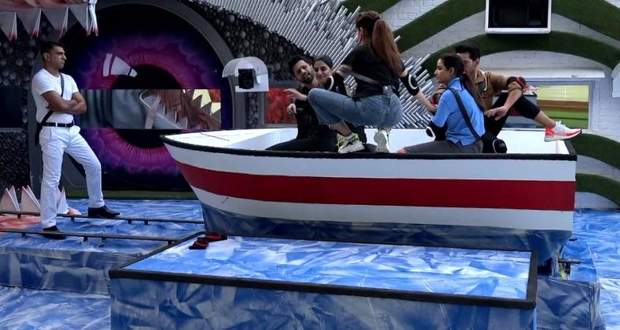 Today's Bigg Boss 14 3 December 2020 episode starts with everyone waking up to the song 'Vele'.

Bigg Boss 14 Day 62 begins with Rubina Dilaik states that she doesn't want to do the cooking duty which creates chaos between the contestants.

Jasmin Bhasin says that Eijaz has 'Bhade Ka Character' which sparks a fight between the two.

The first round for today starts and Rubina loses in this round.

Rahul Vaidya is out in the next round. Rubina gives him an ice pack as he is hurt but he throws it away which sparks an argument.

Rubina brings a tray full of different kinds of things and says that she will give it to ongoing contestants as a way of help.

In the next round, Abhinav Shukla and Jasmin fight for a single chair while Nikki Tamboli is already seated in the other chair.

Jasmin loses this round.

Abhinav and Nikki are the last ones to compete while Jasmin is talking to the camera.

Nikki gets physical while Eijaz Khan and says that it is allowed as she is touching the chair only.

The buzzer sounds and Eijaz declares Abhinav Shukla as the task winner.

Nikki starts crying while Eijaz consoles her and praises her for his efforts.

Bigg Boss announces Abhinav as the second finalist for Bigg Boss 14 finale in the top four and reminds everyone that except for him and Eijaz, the rest are still nominated.

Upcoming Bigg Boss 14 episode update: Abhinav and Rubina get into an intense fight.

© Copyright tellybest.com, 2020, 2021. All Rights Reserved. Unauthorized use and/or duplication of any material from tellybest.com without written permission is strictly prohibited.
Cached Saved on: Thursday 28th of January 2021 05:02:41 AM