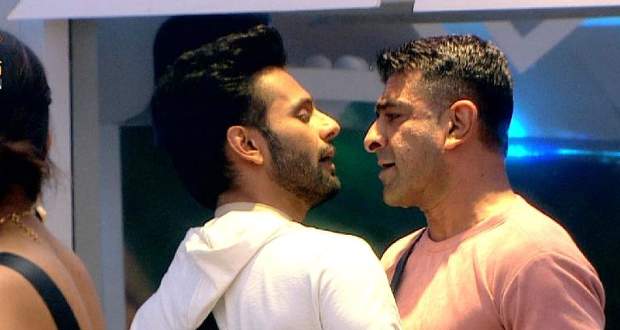 Today's Bigg Boss 14 4 December 2020 episode starts with everyone waking up to the song 'Saliaru Sailare'.

Rahul Vaidya makes fun with Eijaz Khan which leads to a fight between the two.

Eijaz states that Rahul has a man-crush on Aly Goni.

Bigg Boss reminds them that the Big Boss 14 Grand Finale is only one day away and gives them a task to judge if the chosen contestant has reached certain parameters or not.

Later, Bigg Boss tells them to vent out their anger one last time and chooses one contestant who doesn't deserve to be here.

Nikki Tamboli chooses Rahul saying he thinks that he is on vacation instead of being on a reality show.

Eijaz chooses Jasmin Bhasin saying she is nothing else than just being cute.

Abhinav Shukla chooses Rahul saying he is a misogynist for disrespecting his wife, Rubina.

Jasmin chooses Eijaz saying he is manipulative, fake, and changes his personality every week.

Rubina chooses Rahul saying he disrespects women without even giving it a second thought.

Rahul chooses Nikki saying he still can't get over the fact that she put a mask in her pants.

Nikki calls him a dog and reveals that he used to send messages to her PR and her.

Rahul says that her PR wanted them to become a couple but he declined.

Nikki tells Abhinav and Eijaz that outside of Bigg Boss' house, Rahul is called a 'tharki', 'chhichora', and other words.