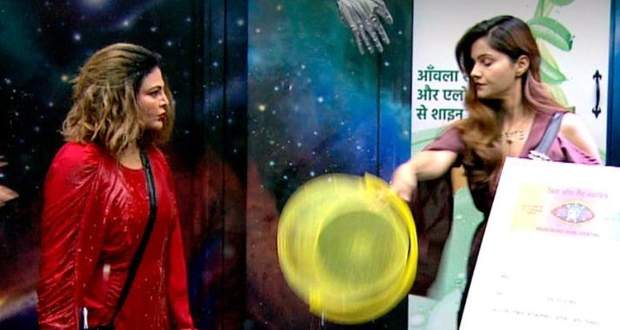 Today's Bigg Boss 14 4 February 2021 episode starts with (Bigg Boss Day 124) Rubina Dilaik arguing with Rakhi Sawant and Devoleena Bhattacharjee regarding them waking Aly Goni and Abhinav Shukla even though they are sick.

Rakhi and Aly are arguing while she says that Aly once stated that Nikki might have been his first preference if he wasn't dating Jasmin which shocks and angers everyone, especially Rubina.

The points come and Rakhi's Bathroom area gets the highest points of 19000 which shocks everyone.

Aly decides to buy the Gym area but Bigg Boss tell him that the time for buying shares is over.

Later, Rakhi verbally abuses Abhinav and Rubina in the bathroom area while Abhinav comes there and argues with her.

Suddenly, Rubina fills a bucket of water and throws it on her which shocks everyone and the housemates start gossiping about them.

Rakhi tells Devoleena to not interfere in her matter while Nikki and Abhinav try to pacify a furious Rubina.

Rubina cryingly says that she only cares about Abhinav and she doesn't care if has to walk out of the Bigg Boss house for stopping Rakhi.

Later, Bigg Boss announces that Rubina broke a rule by splashing water on Rakhi and damaging her mic and as a result, she will be nominated for elimination for the rest of the journey as a punishment.

Further, Bigg Boss berates Aly and Abhinav for teaming up and already deciding who will win the task when they were supposed to be competing against each other and announces that the task is halted.

Later, Rubina reads from the Bigg Boss rulebook that Rahul and Rakhi managed to become the top shareholders in the recent task by standing up for each other and awards them a Hershey's kiss gift hamper.

Rakhi stands in the middle of the bedroom at around 1 AM while Aly tells Nikki that she has been standing there for the past hour.