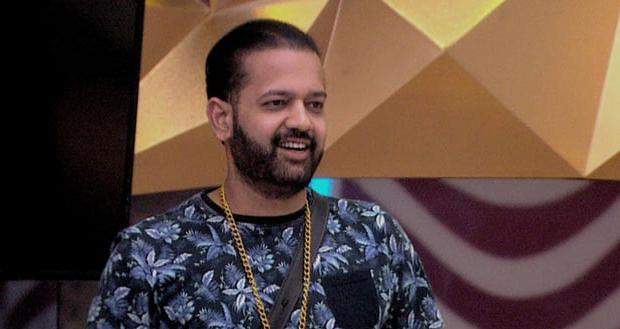 Later, Naagin 5 actor and actress, Sharad Malhotra and Surbhi Chandna come there and entertain the housemates by giving them interesting awards.

Arshi Khan and Rakhi Sawant are bickering while Arshi lightly hits Rakhi and she creates a scene.

Namak Ishk Ka actress, Monalisa entertains them with a dance performance and tells them that she is here to entertain them as well as brings them the bad news.

She says that the name of the contestant she writes on the mirror and kisses will be eliminated.

Finally, she writes Rahul Mahajan's name and kisses it saying that he is eliminated from the show and tells him to say his goodbyes.

Later, Abhinav is scolding Rubina Dilaik saying that she should not insult others just to get some footage on this show.

He starts taunting her saying that she created drama at night which irritates her and she leaves from there kicking the pillow.

Abhinav tells her to not go into Bigg Boss mode with him and orders her to come outside and talk with him.

Abhinav again scolds her and leaves while she cries.

Bigg Boss Day 94 starts with everyone waking up to the song 'Jai Jai Shiv Shankar'.

Nikki Tamboli asks Rakhi to clean her bed as she wants to clean the bedroom but she refuses which sparks an argument between them.

Sonali Phogat says that the luggage room is being separated into parts which creates an argument while Eijaz Khan gives a solution.

Bigg Boss reveals that Rubina, Abhinav, Aly Goni and Jasmin Bhasin broke a rule by planning about the nominations and says that they must be punished.

The four housemates get confused as to when they planned about nominations while Bigg Boss says that they are nominated for this week's eliminations.

© Copyright tellybest.com, 2020, 2021. All Rights Reserved. Unauthorized use and/or duplication of any material from tellybest.com without written permission is strictly prohibited.
Cached Saved on: Saturday 24th of July 2021 11:13:04 PM