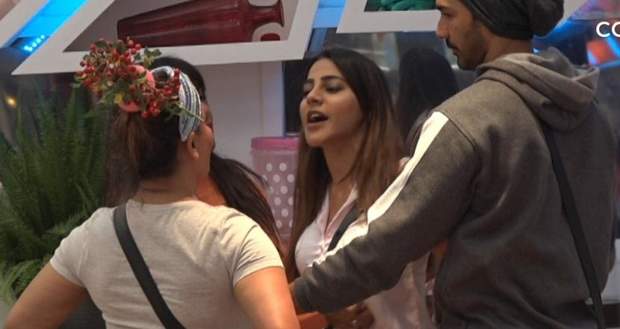 Today's Bigg Boss 14 5 February 2021 episode starts with Bigg Boss Day 125 will start with everyone waking up to the song 'Kajra Re'.

Devoleena Bhattacharjee and Rakhi Sawant do not do the dishes even though it is their duty due to which Rubina Dilaik and Arshi Khan fight with them.

Arshi and Devoleena verbally abuse each other while Devoleena says that Arshi deserves to be cursed which makes her furious.

Later, Devoleena cries saying that Arshi said that she hopes her close one dies and asks Bigg Boss if they are going into the confession room or not.

She suddenly sees Arshi starts breaking the bowls while telling everyone what Arshi said.

Devoleena advances towards her amd confront her while Arshi denies saying such things.

Rubina argues with Devoleena saying that she is creating drama by breaking the dishes.

Devoleena has a breakdown in the bathroom area saying that her Angel is sick and that sis will not leave Arshi and Rubina if something happens to Angel.

Later, Devoleena is in the confession room while Bigg Boss reassures her that her pet dog, Angel is in a good condition and warns her to not have others and herself.

At the same time, Rahul Vaidya keeps taunting Arshi and she cries.

Rakhi provokes Nikki Tamboli by competing her to poop which initiates an intense argument between the two.

Nikki tells her to give back the things she took from her while Rakhi responds that she used up all of her golden eyeshadow and to give it back first.

Rubina gives Nikki a brand new eyeshadow pallet and tells her to give to Rakhi who is talking ill about her.

Nikki takes her stuff and gives the pallet to Rakhi but she throws it on the floor.

Nikki further throws the makeup she gave to Rakhi in the dustbin.

Later, Rakhi looks for the makeup in the dustbin while Nikki taunts her.

© Copyright tellybest.com, 2020, 2021. All Rights Reserved. Unauthorized use and/or duplication of any material from tellybest.com without written permission is strictly prohibited.
Cached Saved on: Sunday 9th of May 2021 11:02:06 PM