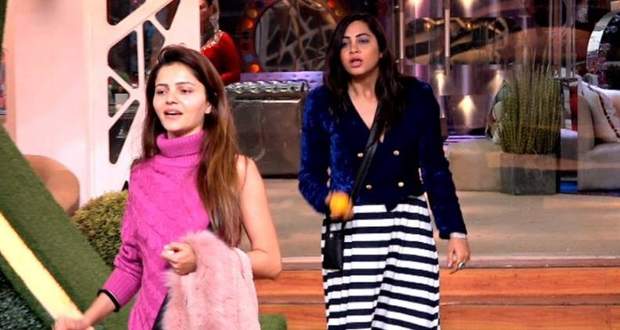 Today's Bigg Boss 14 5 January 2021 episode starts with (Bigg Boss Day 94) Rubina Dilaik, Aly Goni, Abhinav Shukla, Jasmin Bhasin and Nikki Tamboli discussing and wondering which of their conversation indicated that they were planning about nominations while Rakhi Sawant listens to them.

Arshi comes there and taunts Rubina which ignites a fight between the two.

Later, Bigg Boss tells Rubina to use the Hindi language while Arshi taunts her for that also.

Sonali Phogat tells Nikki to do her duty of cleaning the bedroom area but she refuses to do so as there is a wet towel of Rahul Vaidya on the sofa which erupts a fight between her and the housemates.

Meanwhile, Arshi and Nikki go into the bedroom area and puts more things on the sofa.

Sonali goes into the bedroom and cries while others console her.

Rakhi and Sonali insult Arshi which creates a fight between them while later Rubina mocks her and they get into a heated argument.

Rakhi loudly talks to the camera while a sick Jasmin gets irritated and exits from there.

Jasmin cries while Aly consoles her and requests Bigg Boss to call them into the confession room.

Bigg Boss Day 95 starts with everyone waking up to the song 'Khud Ko Kya Samajhti Hai'.

Rakhi accuses Arshi of hitting her which initiates a fight between them.

Nikki does everyone's bed except Rakhi's which results in Rakhi saying that she will not do her dishes also.

Eijaz advises Arshi and she goes to the living room and states that she will do Rakhi's bed so that Rakhi does the dishes.

Later, Arshi passes a comment at Rubina for making food which again initiates an intense fight between the two.

Rubina is talking with Nikki while Abhinav tells her that she is looking like a crybaby.

Upcoming Bigg Boss 14 episode update: Rubina in tears because of Abhinav's harsh comments at her.

© Copyright tellybest.com, 2020, 2021. All Rights Reserved. Unauthorized use and/or duplication of any material from tellybest.com without written permission is strictly prohibited.
Cached Saved on: Sunday 17th of January 2021 08:45:34 AM