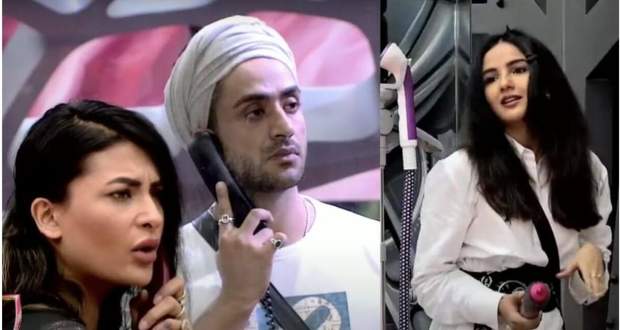 Today's Bigg Boss 14 5 November 2020 episode starts with Aly Goni telling Jasmin Bhasin to talk to Pavitra Punia to let her be the captain.

Jasmin, Pavitra and Abhinav Shukla talking to each other while former tells Pavitra to let her be the captain and she refuses.

The last round of captaincy task starts and Naina Singh is the coordinator.

Aly is talking to Pavitra while Rubina Dilaik tells her doubts about Jasmin to Abhinav after which they argue.

Jasmin, Abhinav and Rubina talk to each other and clear latter's doubt.

Aly tells Jaan Kumar Sanu that his personality is now being seen while Pavitra and Shardul Pandit are arguing the other side of Bigg Boss house.

Bigg Boss 14 Day 34 starts with everyone waking up to the song 'Cutiepie'.

Aly and Nikki Tamboli have a deal of stealing coffee after he gets out while Jasmin tells him that he better not like her.

Abinav asks Rubina whether she is fasting or not and she responds with a positive answer.

Pavitra tells Aly about her fight with Shardul and Jasmin intervenes after which both girls fight.

Pavitra tells her to not get possessive of her friends after which she clears her misunderstanding with Shardul.

Bigg Boss announces that the Red zone residents will have an opportunity to save themselves from nominations in a task however one contestant will not get an opportunity and Jasmin will be the one to decide who.

She chooses Rahul Vaidya after which Bigg Boss announces that Red zone residents will not be the ones fighting and they will have to find a substitute from Green zone residents.

Abhinav reads from a letter about the task where the three will have to hold on to a primal prop and the last one still holding on to it will be the winner while Jasmin will be the coordinator of the task.

Rubina gets 'Shringar' for Karvachaurh from Bigg Boss due to which she gets happy and gets dressed.

Eijaz Khan and Aly are talking about the ongoing task while Pavitra is dragging other two as she wants to use the bathroom and Abhinav is resisting.

Eijaz tells Shardul that he does not have the desperation that Pavitra has.

Naina tells Nikki that she can let go if she is hurting while the latter says only when her hand breaks due to which former praises her.

Abinav wins the task and Rubina is safe from this weeks nomination.

Bigg Boss tells Rubina to go to the Green zone while Abhinav praises Pavitra for sticking till the end.

Rubina and Abhinav perform Karvachauth rituals and she breaks her fast by eating from Abhinav's hands and Jasmin blesses their marriage.

Eijaz and Shardul are talking while former cries and the latter consoles him.

© Copyright tellybest.com, 2020, 2021. All Rights Reserved. Unauthorized use and/or duplication of any material from tellybest.com without written permission is strictly prohibited.
Cached Saved on: Sunday 9th of May 2021 11:02:28 PM