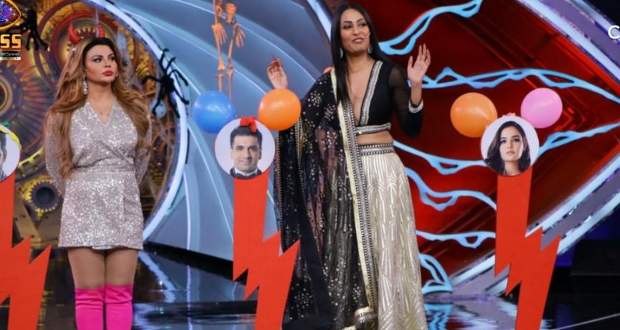 Today's Bigg Boss 14 6 December 2020 episode starts with Rakhi Sawant reciting a dialogue of Salman Khan and him appearing in his seat while Vikas Gupta looks on.

Salman says that the second level of Bigg Boss season 14 is starting and introduces Kashmira Shah as the third challenger.

Kashmira and Rakhi bicker while Salman makes them cut a cake for the anniversary of them being enemies.

Salman tells Rahul Vaidya that he is lacking enthusiasm for the past few days and asks him if he would leave when given the opportunity.

Rahul gets emotional and says that he would leave cause he is homesick.

Salman tells him that was he didn't have the lowest votes but he will be going cause he chose to go.

Salman welcomes the fourth challenger Rahul Mahajan and makes him do the task of 'RaRa Ki Suhagraat' with Rakhi.

Arshi Khan enters the set as the fifth challenger and states that she is not a friend of Rakhi.

Salman makes them do the task of asking each other questions and getting a slap from the fake hand attached to the chair whenever they lie.

Shruti Sharma does a dance performance and promotes her serial, 'Namak Ishq Ka'.

Salman introduces Manu Panjabi as the sixth challenger and analyses the housemates present in the Bigg Boss house.

Eijaz tells Rubina that only Vikas and Manu are the real competitors for them.

Krushna Abhishek makes an entry and funnily humours everyone by insulting them.

Salman tells the housemates that he is handing them over to the challengers and gives them the advice to prepare themselves.

Housemates stand in a set while Vikas tells the challengers to state who is their target.

The contestants get flour poured on them each time someone targets them.

Challengers inform them that they are coming tomorrow and bids them goodbye.