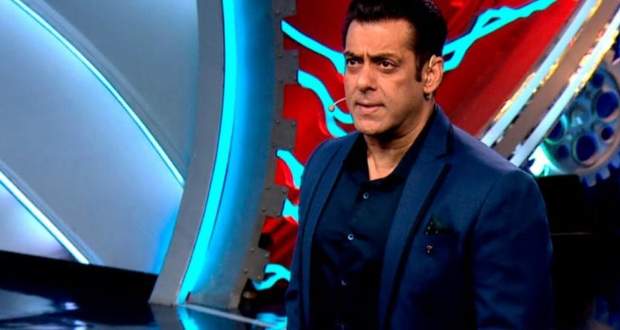 Later, Salman greets the housemates and tells Nikki Tamboli that due to her dragging Rahul Vaidya's girlfriend name, they had to call in Disha which shocks everyone.

Salman calls in Disha and the housemates get relieved seeing that it is Disha Patani.

Salman makes them dance to 'Slow Motion' and later say that the nation deserves a sorry for having to see that.

Salman says that earlier a guest entered the house of Bigg Boss and shows a clip of Harsh Rajput addressing himself as Rehan and requesting Julie (Rakhi Sawant's character) to go on a date with him.

Rehan tells her that he gets his powers from blood and asks her which contestants blood represent which emotions.

Salman tells Rakhi to go to the theatre room and asks her if the words she used should be used in any circumstances.

The door behind her opens with a do not cross tape as Salman tells her to cross that line if she cannot stop herself from crossing other people's personal boundaries.

Rakhi apologises to him and says that she will not condone that they of behaviour anymore and requests him to let her stay in the show.

Later, Salman tells the audience that it is supporter week and introduces the supporters.

Salman talks to them regarding content creation and emotional feelings.

Salman berates everyone that if their emotions are real then why do they blame Devoleena Bhattacharjee and Rakhi of planing the breakdowns for content.

Salman praises Rahul and says that he was the only one who's thoughts and judgements were clear.

He further says that Rahul is the only one who has real sympathy.

He further berates Rubina for accusing the channel of endorsing the housemate's wrongdoings.

Salman apologises to the audience for having to see that while the supporter talk among themselves.

© Copyright tellybest.com, 2020, 2021. All Rights Reserved. Unauthorized use and/or duplication of any material from tellybest.com without written permission is strictly prohibited.
Cached Saved on: Sunday 2nd of October 2022 06:00:24 AMCached Disp on: Friday 7th of October 2022 03:32:09 PM