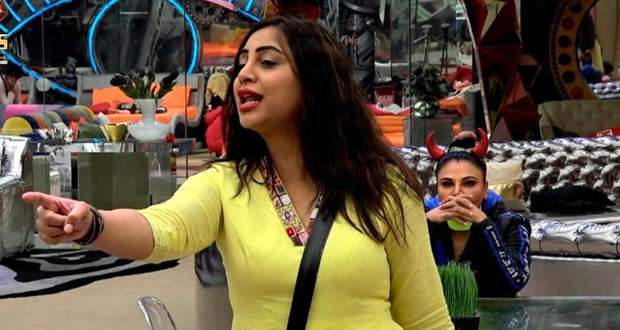 Rakhi Sawant talks about how her husband threatened to divorce her when the media came to their wedding.

She later tells the Bigg Boss in confession room that she wants her husband to reveal himself once to the public and says that she's flirt with Abhinav to make him jealous.

Later, Abhinav taunts Rubina Dilaik which upset her and she tells him that she just needs him to listen to her sometimes.

She tells him that she never questioned him about the Kavita Kaushik situation and he gets angry at her and says that she jas just questioned his character.

Bigg Boss Day 96 start with everyone waking up to the song 'Zehar Hai Ke Pyar Hai'.

Nikki again does not do Rakhi's bed which irritates Eijaz Khan and he confronts her saying that she makes Rakhi feel like an 'achhut (untouchable)'.

Rubina tells everyone that Eijaz is a false narrator which Eijaz comes there and a fight erupts between them.

Arshi Khan says that Rubina is talking in English warns her of breaking the chair if she speaks in English anymore.

However, Rubina keeps talking in English and Arshi breaks the chair which initiates an argument between them.

Bigg Boss says that Arshi cannot participate in the upcoming captaincy task as a part of the punishment for breaking the chair.

Later, Vikas reads from the Bigg Boss rulebook about the captaincy task in which the housemates will be acting as scientists while the rest will be rats.

The scientists will discuss together and will make either red pill or the green pill poisonous by putting chemical of that colour in their bowl.

Aly Goni and Sonali Phogat will be the initial scientists for the task.

Nikki eats the poisonous pill in the first round and gets out the task.