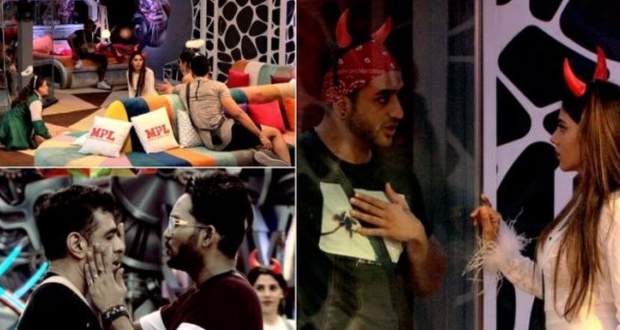 Today's Bigg Boss 14 6 November 2020 episode update starts with everyone waking up to the song 'Shaitan Is Saala'.

Naina Singh gets angry at Shardul Pandit for not helping her cook and the two get into an intense argument.

Jasmin reads from Bigg Boss 14 rulebook about the luxury budget hamper task where the housemates will be divided into two groups, one of the demons and other angles.

The groups will have to follow the rule written on the board in the living area.

The group to break the most rules will lose while Jasmin is the coordinator of the task.

Nikki tells Rubina to rip her stuffed bunny while the latter says that she's trying.

Nikki tells Rubina to put Chutney on her head and she doesn't while Aly tells Jasmin that she is being biased.

Aly tells other demons to stoop low to get the other group to break rules.

Eijaz makes Jaan put his hand in the toilet and flush with his hand inside.

Eijaz argues with Jasmin while Aly gets angry at her and shouts at her.

Aly tells Jasmin to let them get their anger out and not be biased.

Eijaz and Nikki call Jaan a dog after which Eijaz tickles him.

Eijaz accidentally breaks a bowl after which he and Nikki have an argument.

Jaan touches Eijaz after which they fight and abuse each other with words while Aly intervenes.

Jaan tells Eijaz to not call him a brother anymore after which Jaan cries with Jasmin consoling him.

Bigg Boss asks Jasmin to give her decision and she replies that technically the demons group won the task.

Bigg Boss tells them to get their luxury hamper from the storeroom and share it with Jasmin.

Abhinav gets angry at his personal belonging being destroyed.

Rahul wears a wig and he and Shardul flirt with each other while Naina sits and has fun.

Aly advises Jasmin to always respect Eijaz as he is a senior.

Rubina reads from the Bigg Boss 14 rulebook about 'Dabur Dant Rakshak Aayushma Daant' Task where Rubina, Pavitra, Eijaz, Nikki, and Jaan will have to choose one housemate for one of the five taglines that are on the board in the garden area.

Jasmin will decide the winner of the task after discussing with Aly and the winner will get a gift hamper from Dabur Dant Manjan.

After discussing with Aly, Jasmin announces Pavitra as the winner.

Eijaz and Jaan reconcile while the latter cries.

© Copyright tellybest.com, 2020, 2021. All Rights Reserved. Unauthorized use and/or duplication of any material from tellybest.com without written permission is strictly prohibited.
Cached Saved on: Friday 6th of August 2021 01:52:18 AM