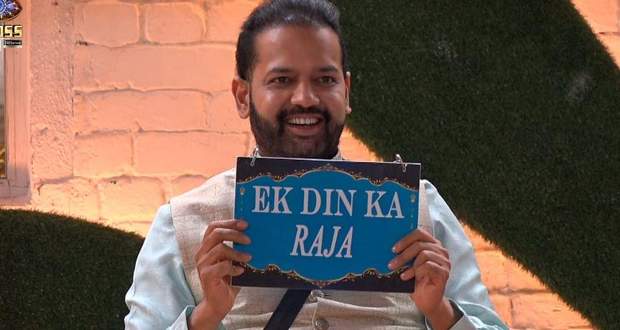 Bigg Boss tells Vikas Gupta about the five tasks given to him and reminds him that the winning prize is two joker cards.

Vikas enters the house and tells Eijaz that someone is waiting for him outside.

Bigg Boss tells Kashmira Shah to type a message for each contestant in the house on the computer in front of her.

Kashmira enters the house and targets each contestant.

Vikas starts planning with Kashmira to wake everyone up.

They fake a fight between them and wakes everyone.

Bigg Boss 14 Day 66 starts with everyone waking up to the sound of the buzzer.

Arshi creates a fight between her and Vikas while everyone tells them to patch up.

Bigg Boss welcomes Manu Panjabi and he enters the house.

Jasmin Bhasin initiates a fight with Eijaz and Kashmira compliment him for not backing out of it.

Rahul Mahajan makes his entry with a sign saying 'Ek Din Ka Raja' and Bigg Boss instructs housemates that they have to follow his orders until the next morning call.

Arshi pesters him while Vikas tells Abhinav and Rubina Dilaik to fight with each other for the game.

Manu confronts Rubina-Abhinav which sparks a fight between the couple.

Vikas tells Arshi that he wants to keep everyone awake but Rahul denies him.

Vikas wakes everyone up one by one and asks them if they are happy with Rahul's ruling.

Manu tells Rahul about his suspicion that Vikas is given a task by the Bigg Boss.

© Copyright tellybest.com, 2020, 2021. All Rights Reserved. Unauthorized use and/or duplication of any material from tellybest.com without written permission is strictly prohibited.
Cached Saved on: Tuesday 2nd of March 2021 09:53:46 AM