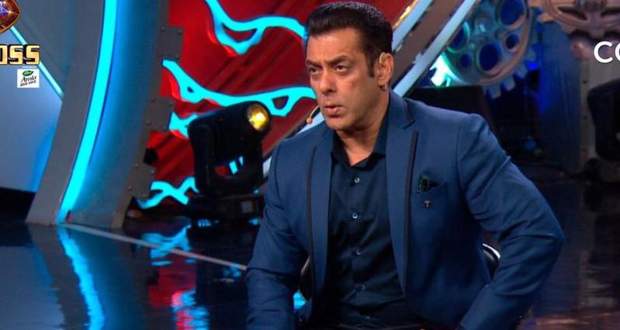 Today's Bigg Boss 14 7 February 2021 episode starts withSalman Khan greeting the audience in a sour mood and saying that he is not happy to converse with the housemates but has to do it as it is her job.

He sits in a chair and greets the housemates and asks Devoleena Bhattacharjee why she burst out regarding Arshi Khan's words.

Further, Salman takes some bad words and asks Abhinav Shukla and Rubina Dilaik which is worse, Rubina's or Rakhi Sawant's.

Salman further asks Rubina what Abhinav told her about Nikki Tamboli and Arshi Khan which creates an argument between them.

Elsewhere, Jaan Kumar Sanu and Jasmin Bhasin discuss with other supporters that even breathing had become a problem for contestants in the Bigg Boss house.

Abhinav takes Rubina to the luggage room and orders her to not use the word 'Psychiatrist' anymore which angers her.

He further tells Jyotika Dilaik that he is glad that Rubina accepted that she needs help due to which she gets emotional and cries.

He asks Rubina if she is just acting as opinionated, aggressive and harsh for the show when Rubina reveals that she had anger issues and suicidal tendencies in the past and has been medicating and taking therapies since then.

Salman further asks Abhinav he didn't tell Rakhi that it was crossing the limits when she came to him and asked to make her wear Saree.

Jasmine comments on it while Jyotika argues with her for it.

Salman invites Jasmin to the set and they dance to the song 'Chunari Chunari'.

Salman announces that Arshi is getting evicted today.

Housemates get emotional as she departs while Rahul gives her the stuffed animal, Sheru.

Abhinav tells Rubina that her comments are going indirect and tells her that he doesn't expect her to do that and takes Jasmin's name which irks her.

© Copyright tellybest.com, 2020, 2021. All Rights Reserved. Unauthorized use and/or duplication of any material from tellybest.com without written permission is strictly prohibited.
Cached Saved on: Sunday 9th of May 2021 04:51:50 AM