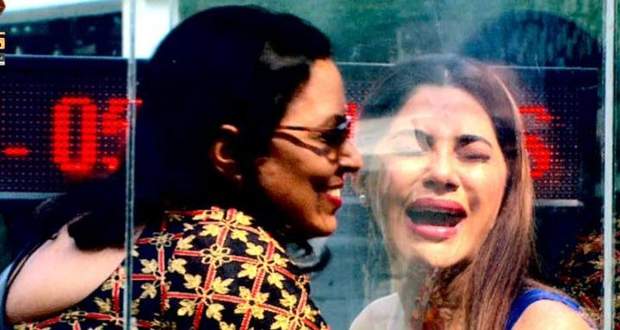 Today's Bigg Boss 14 7 January 2021 episode starts with (Bigg Boss Day 96) Nikki Tamboli having a tantrum saying that she shouldn't have made alliances.

Aly Goni puts green colour for the poison and calls in Vikas Gupta.

Vikas eats the green pill and gets saved after which he takes Aly's lab coat and outs him from the task.

In the last round, Vikas puts the Green colour in poison and Rakhi eats the red pill making her safe.

As promised, she outs Vikas and takes his lab coat making her and Sonali final contenders for captaincy.

Bigg Boss Day 97 starts with everyone waking up to the song 'Naah'.

Rubina Dilaik reads from the Bigg Boss rulebook about the luxury budget task named 'talk time' and they will get 100 minutes combined between all of them to talk to their relatives.

However, there will be a freeze and release at any time of the task during which they will have to freeze at their spot.

Bigg Boss announces that Nikki's relatives are first and tells the housemates to choose a time limit for her.

They collectively agree to give her 8 minutes and she is about to go while Bigg Boss announces freeze.

She starts crying and Bigg Boss tells Nikki to release and she runs to the garden area and sees her mother.

As they are talking, Bigg Boss tells her to freeze and asks her mother who she wants to become captain from Rakhi and Sonali and she chooses Rakhi.

Abhinav Shukla is next and gets 9 minutes and meets Shilpa Agnihotri.

Aly gets to go next and is given 10 minutes. He stands up while Bigg Boss freezes everyone.

Aly's elder sister, Ilham Goni is on a video call while Bigg tells him to go to the theatre room. She tells him that Eijaz loves him like a little brother.

She gives her vote to Sonali.