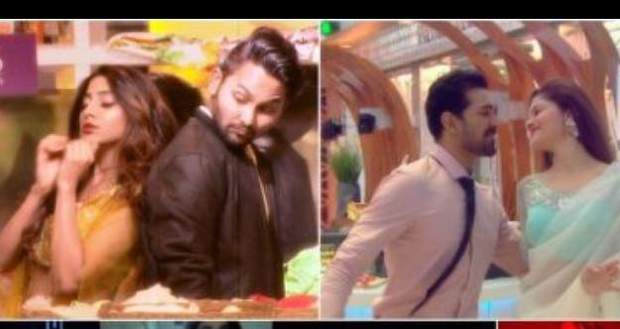 Today's Bigg Boss 14 7 November 2020 episode starts with Salman Khan answering the questions said by a voice after which he greets the audience.

He says that this Weekend Ka Vaar episode will be full of celebrations with the statement 'Abhi Nahi To Kabhi Nahi'.

Inside the Bigg Biss 14 house, a task is going on where contestants have to ring a bell by saying one other contestant's name and saying the thing that no one has said about them.

Salman greets the housemates and says that today there will be entertainment only and that he has a lot to say but will postpone it till tomorrow.

He tells Aly Goni that a lot of girls want to talk to him and says that these girls need a representative in the house to do healthy flirting with him after which he tells Jasmin Bhasin to choose someone from the house.

She chooses Nikki Tamboli after which Salman tells them to give a demonstration.

The guests go through the BBQ test with humor-filled questions.

All the gents do the 'Garmi hook step' including Salman and guests.

Salman says that the guests present here today are their well-wishers and says that they will be going through the journey of Bigg Boss 14 contestants through dance performances.

First up are Eijaz Khan and Pavitra Punia who perform to the song 'Allah Duhai Hai' after which Jasmin and Aly are seen dancing to 'Tere Mere Beech Mein'.

Next up are Abhinav Shukla and Rubina Dilaik who perform to 'Biwi No.1'.

Then, Rahul Vaidya is seen dancing to 'I Am The Best'.

The guests also perform to songs like 'Saaton Janam' and 'Log Kya Kahenge' after which they leave.

Salma Khan says that there is also another guest in the Bigg Boss Theater area and Kavita Kaushik is revealed.

He tells her that she will get a golden chance of again going into the Bigg Boss house if she can impress the celebrity panel including Aarti Singh, Vindu Singh, Kamya Punjabi, and Surbhi Chandna.

During the questioning, she talks about her experience in Bigg Boss 14 after which the panel gives her a green signal to go inside the Bigg Boss house.

Salman tells her that she will shortly go into the house after which he asks the housemates about who is nominated for this week's eliminations.

Inside the house, Aly and Jasmin are talking about Eijaz while Kavita enters the house and everyone is left stunned.

Salman bids goodbye to the audience.

© Copyright tellybest.com, 2020, 2021. All Rights Reserved. Unauthorized use and/or duplication of any material from tellybest.com without written permission is strictly prohibited.
Cached Saved on: Sunday 9th of May 2021 09:28:06 PM