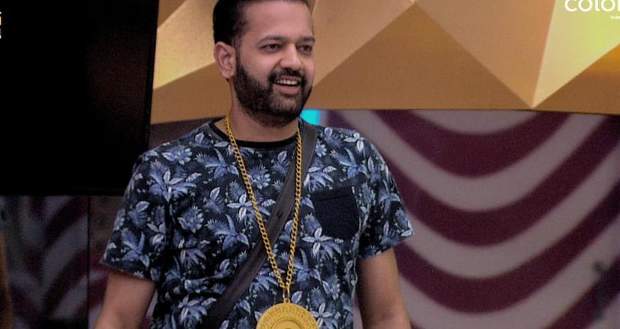 Arshi Khan tells Rahul Mahajan and Manu Panjabi that Vikas Gupta may be doing a task as he has almost used most of the ration.

Vikas unravels his past fight with Arshi to Manu and sorts out the misunderstanding he had regarding Bigg Boss season 12.

Arshi tries to get Rahul and Vikas to fight but fails to do so.

Vikas confronts her and tells her to not incite others to fight with him.

Bigg Boss announces that the house needs a captain and tells Vikas to bring the prop from the theatre room.

Vikas brings the Chain with C engraved on it from the theatre room. He reads from the Bigg Boss 14 Rulebook about the Captaincy task in which Rahul will be the chain bearer and he will transfer the chain to a contestant of his liking after each round.

There will be six rounds and the contestant with the chain at the end of the last round will be the next MPL captain.

Eijaz Khan tells Vikas that Rubina Dilaik and Abhinav Shukla do not even deserve to be captains.

Eijaz gets the chain in the first round which shocks Rubina.

Eijaz tells Rubina, Abhinav and Jasmin Bhasin to just try to convince him and not sit at a place.

Manu gets the chain in the second round. Manu states that he is committed to giving the chain back to Eijaz.

Arshi gets the chain in the third round which shocks everyone and Manu clears that he was just observing their behaviour during the task.

Eijaz gives the chain back to Arshi in the fourth round which sparks arguments in the house.

After some back and forth, finally, Manu gets the chain in the last round making him the winner and Bigg Boss 14 Captain for the week.

Upcoming Bigg Boss 14 episode update: Jasmin-Eijaz to get at each other's necks.

© Copyright tellybest.com, 2020, 2021. All Rights Reserved. Unauthorized use and/or duplication of any material from tellybest.com without written permission is strictly prohibited.
Cached Saved on: Thursday 28th of January 2021 05:18:51 AM