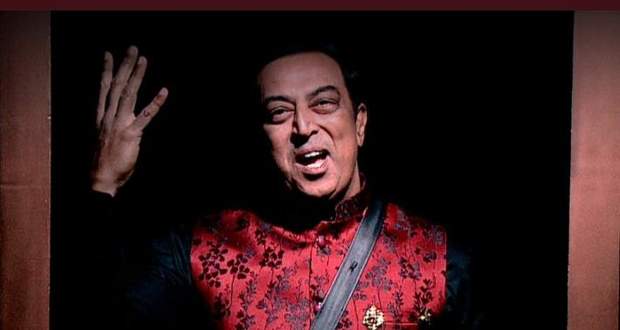 Today's Bigg Boss 14 8 February 2021 episode starts with (Bigg Boss Day 129) starts with everyone waking up to the song 'Mayya'.

Everyone sits in the living area while the housemates see a shadow of a girl in the screen and guess that it is Jasmin Bhasin while Bigg Boss announces that Jasmin has come as a supporter of Aly Goni.

Jyotika Dilaik comes next as a supporter of Rubina Dilaik.

Jaan Kumar Sanu comes as a supporter of Nikki Tamboli.

Rahul Mahajan come was a supporter of Abhinav Shukla.

Toshi Sabri comes as a supporter of Rahul Vaidya.

Vindu Dara Singh comes as a supporter of Rakhi Sawant.

Bigg Boss announces that the supporters will be staying with them for a week and while supporters enter the Bigg Boss house.

Bigg Boss assures Devoleena Bhattacharjee that she also has a supporter and a clip of Paras Chhabra comes and he tells her to hold on as he is coming.

Further, Jasmin talks about her parents approving of their relation to Aly while he praises Rubina and says that she give him emotional strength.

Later, Rahul M. asks Rakhi if he should file a case on her husband and tells her that he will find a better husband for her and will get her married.

Jasmin goes to Aly and tells him to stay wary of Jyotika as she has talked a lot of negative things about everyone including her and him to the media in an interview.

Jasmin tries to incite Rahul V. against Rubina why manipulating him while Rahul M. talks about how Rakhi's fans trolled him on social media.

Further, Jasmin talks about Rubina to Nikki who further slips their conversation to Rubina.

Rubina says that Jasmin isn't happy to meet them and later tells Aly that she doesn't want to lose her relationship with him due to other relationships.

© Copyright tellybest.com, 2020, 2021. All Rights Reserved. Unauthorized use and/or duplication of any material from tellybest.com without written permission is strictly prohibited.
Cached Saved on: Saturday 31st of July 2021 10:48:13 AMCached Disp on: Wednesday 4th of August 2021 04:43:38 AM