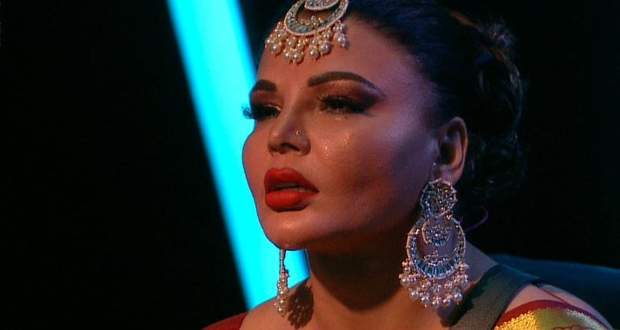 Today's Bigg Boss 14 8 January 2021 episode starts with (Bigg Boss Day 97) Arshi Khan and Rakhi Sawant talking about the situation in which her marriage was done.

Bigg Boss announces that the relatives coming is of Sonali Phogat and the housemates give her 7 minutes.

Sonali gets emotional seeing her daughter and happily talks to her.

Later, Rakhi gets emotional thinking about her mother while Vikas Gupta consoles her.

Rahul's relative comes next and he gets 11 minutes.

Bigg Boss freezes everyone as he is about to go outside and he sees his mother coming.

She tells him that there is something fixed for his with Disha Parmar which makes him ecstatic.

She gives her vote to Sonali and leaves.

Arshi Khan and Eijaz Khan have a fight after which she goes into the bathroom area and has a breakdown.

Bigg Boss announces that Eijaz's relative is next and the housemates give him 14 minutes.

He gets emotional seeing his brother and asks him about his father. His brother tells him that his father is proud of him which makes him cry.

He gives his vote to Rakhi and leaves.

Later, Eijaz talks about his father to Sonali while Rahul Vaidya and Rakhi have fun acting like a couple.

Arshi says that there is no sabji left which angers Rubina Dilaik and they get into an argument.

Abhinav, Rubina and Nikki Tamboli are talking in the garden area while Nikki says that Jasmin is acting as a coordinator in everything while Aly Goni tells Jasmin that she has changed in the past weeks.

Bigg Boss Day 98 starts with everyone waking up to the song 'Hum Dum Soniyo.'

Abhinav and Arshi get into a fight regarding while he makes her do his laundry folding.

Abhinav tries to make Rakhi wear a Saree but fails after which he gets help from Sonali.

Rakhi gets 6 minutes and she gets emotional seeing jer mother on the screen.

She goes into the theatre room and her mother informs her that she is in hospital.

Rakhi asks her of her husband came and requests her to tell him to show himself once to everyone.