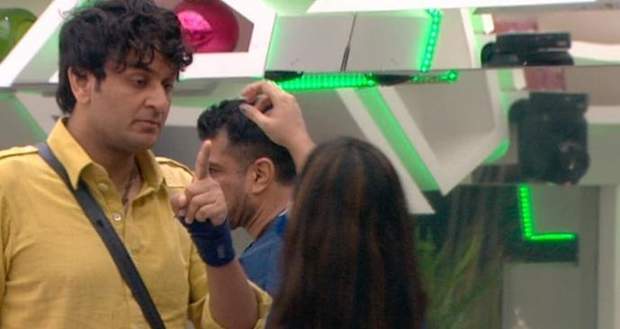 Today's Bigg Boss 14 9 December 2020 episode starts with everyone waking up to the song 'Laila Main Laila'.

Arshi Khan tries to provoke everyone to get into a fight with Jasmin Bhasin but fails.

Arshi confronts Vikas Gupta saying she knows about his tasks which sparks an argument between the two.

She creates a scene in the house saying that Vikas touched her hand.

Rahul Mahajan tells Arshi that her fights with Vikas are scripted which hurt her feelings and she storms off.

Rubina Dilaik reads from the Bigg Boss rule book about the immunity task, 'window shopping' in which they will have to save their stalls window from getting dirty to win.

There will be two teams, one of Vikas which will consist of Rubina, Jasmin and Kashmira Shah will the other team will be Arshi with Eijaz Khan, Abhinav Shukla and Rahul.

The winning team members will be immune from the eliminations while the losers will be nominated. Manu Punjabi will be the coordinator of the task.

The first round starts and both the teams start throwing mud at the other team's window.

Arshi's team wins the first round.

Kashmira requests Arshi's team to purposefully lose which shocks them.

During the second round, Kashmira accidentally hurts Eijaz and makes him fall which initiates a fight between the two.

Vikas' team wins the second round.

Rubina and Jasmin blame Eijaz for getting violent in the task.

Arshi touches Vikas which makes him feel uncomfortable and he requests Bigg Boss to take action as she is crossing her limits.

Bigg Boss says that the task is halted for today and calls Arshi and Vikas to the confession room.

He tells them to not touch someone without their permission and warns them that it should not happen again.

Vikas tries to clear his and Arshi's misunderstanding but she initiates a fight instead. He walks away from her.

Arshi's team is discussing and they come to an agreement that they will lose to save Kashmira.

Arshi's team is having fun while the lights go off indicating that it is midnight and Jasmin orders them to go to sleep which sparks an argument.

© Copyright tellybest.com, 2020, 2021. All Rights Reserved. Unauthorized use and/or duplication of any material from tellybest.com without written permission is strictly prohibited.
Cached Saved on: Sunday 17th of January 2021 08:44:55 AM