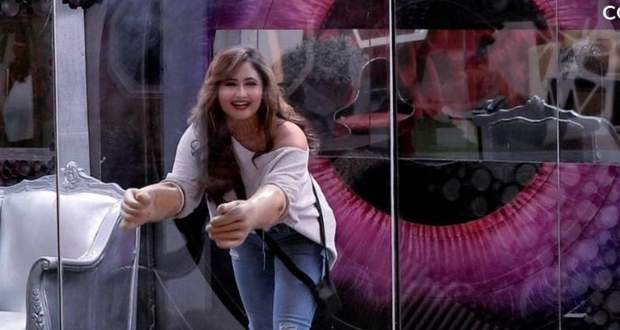 Rubina happily talks to her while Bigg Boss freezes her and says that it is time for her sister to go.

She gives her vote to Rakhi Sawant and leaves.

Jasmin Bhasin's gets 12 minutes and she happily goes to meet her parents.

Her father tells her to focus on her game and play solo. He tells her to understand what he is meaning to say.

They give her vote to Rakhi and leave.

Housemates start teasing Aly while Jasmin convinces Aly that they didn't mean it like that.

Aly tells Bigg Boss with humour to out him the next day while Jasmin tries to cheer him.

Rahul Vaidya confronts Aly and he reveals his true feelings to him and says that it would be better if he leaves.

Arshi Khan apologises to Eijaz Khan but he refuses his apology which makes her cry.

Next, Arshi gets 5 minutes and gets ecstatic to see her brother. She pesters him to tell Eijaz to forgive her.

He gives his vote to Rakhi and exits.

Later, She gets into a Vikas Gupta and tells him to see who comes to meet him.

Lastly, Vikas gets 4 minutes and Rashmi Gupta comes as his supporter.

She tells him that he earned the title of Mastermind and says to not get affected by what others say.

Vikas thanks her for coming.

She personally tells Aly and Jasmin to not hold personal grudges and requests to not bully him and corner him.

She gives her vote to Rakhi and exits.

Bigg Boss Day 99 starts with everyone waking up to the song 'Dhoom Machale.'

Everyone waits for Salman Khan while Bigg Boss orders them to freeze and they get confused.

They see Pavitra Punia entering while Eijaz gets shocked to see her.

They have a romantic talk while Eijaz reveals it to her that he started loving her way back when they were in the Red Zone area.

Pavitra goes while telling him that she'll wait for him.

© Copyright tellybest.com, 2020, 2021. All Rights Reserved. Unauthorized use and/or duplication of any material from tellybest.com without written permission is strictly prohibited.
Cached Saved on: Wednesday 14th of April 2021 11:57:09 AMCached Disp on: Thursday 15th of April 2021 07:19:15 PM