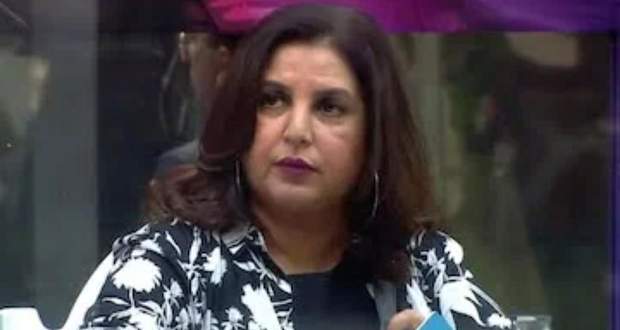 Today's Bigg Boss 14 9 November 2020 episode starts with Eijaz Khan and Jasmin Bhasin talking about his actions in the Demon-Angel task.

Bigg Boss announces that the also of twists have happened and there is again a new twist.

He says that the red zone is removed from the Bigg Boss 14 house and that doesn't mean that everyone is safe.

Big Boss says that now fights will be happening between friends and ends his talk with 'Abhi Nahi Toh Kabhi Nahi'.

Nikki Tamboli questions Eijaz about what he said to Jaan Kumar Sanu after which the three get into an argument.

Nikki then argues with Jaan.

Bigg Boss 14 Day 38 starts with everyone waking up to the song 'Gandi Baat'.

Aly Goni states that he won't eat or bathe or wear mic until he gets any information about when he will be out of the glass room.

Bigg Boss tells him to wear his mic but he refuses.

Jasmin tries to convince him while he threatens to destroy the property.

Bigg Boss addresses Aly being locked in a room and says that it has to be done for the safety of society and other contestants and further confronts him.

Big Boss that Aly's reports came back negative and that he can move his things out of the room with telling to not go inside the room.

Aly is braiding Jasmin's hair while Rahul tells Nikki that as much is happy for them, he feels sad for himself cause he wants someone like this in this house.

Rahul and Nikki are confronting each other while Nikki gets emotional.

The garden area curtain opens up to reveal Farah Khan, Charul Malik, and Amit Tyagi after which Bigg Boss introduces them to the housemates and says that they are the jury of Farah Ki Adalat.

Farah informs them to give a clear response as one contestant will be nominated by them.

First up is Eijaz who is asked questions regarding his personality, his relationship with Pavitra, his trouble with Kavita, and a lot of other topics after which Farah tells Pavitra to hug him.

Next up is Rubina Dilaik who is asked questions regarding her fight with Bigg Boss, her feeling like she's in a serial, her centre being Abhinav Shukla, and other topics.

Next up is Aly who is asked questions about topics related to Jasmin.

Afterwards, Pavitra is asked questions like was she was jealous when Eijaz picked Jasmin, why she stands against only their friends, who she expects from, and who can expect from her.

Next is Jasmin who is asked questions regarding her not doing anything, her being jealous of Nikki as the first conformed contestant, and her switching off after the second week.

Further, Nikki is next who is asked questions about who she thinks her friends, who she can't befriend in this house and she replies with Rubina who gets into an argument with her.

Upcoming Bigg Boss 14 episode update: Jaan to be accused of being fake.

© Copyright tellybest.com, 2020, 2021. All Rights Reserved. Unauthorized use and/or duplication of any material from tellybest.com without written permission is strictly prohibited.
Cached Saved on: Friday 6th of August 2021 03:18:30 AM