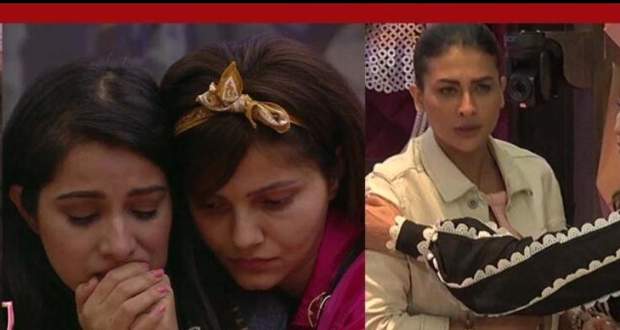 Today's Bigg Boss 14 12 October 2020 episode (10th Day) starts with everyone waking up to a mashup of songs from the film 'Student Of The Year'.

While deciding the seven essentials from Big Boss mall for the day, Rahul Vaidya tells Abhinav Shukla to think logically and they have a small argument over it.

Eijaz Khan taunts everyone as he thinks that everyone is making fun of him.

Pavitra Punia and Jaan Sanu Kumar laugh Nikki Tamboli as she is steam ironing her ex-boyfriend's boxers by saying that even boxers have standards nowadays.

Bigg Boss14 Day 10 starts with Jasmin Bhasin advising Jaan to play independently and to not play as someone else's sidekick.

BiggBoss 14 senior Hina Khan gives Jasmin the task to choose who should get their its from the seven essentials quota and give a reason as to why the others should not get their items. Jasmin argues with Pavitra as the latter thinks that Jasimin's choice is not acceptable. Later, She trades her three items for two packets of Salami.

Bigg Boss announces the nomination process in which the freshers have to nominate two other contestants by sticking their photo to a clay pot and breaking it while giving a valid reason for nominating them. Nikki cannot be nominated as she is a confirmed contestant of BB14.

BigBoss 14 gives Seniors the right to choose the contestant who will be evicted from nominated contestants. The seniors announce that they are going to let Sara go. Everyone gets emotional due to Sara's departure while Jaan feels guilty as he was the only one who nominated her.

Pavitra hugs Eijaz and reveals to him that she nominated him because she was jealous. Later, she kisses him on the cheek and flirts with him.

The day 10 of Bigg-Boss 14 ends with contestants in the bedroom area singing the song, 'Inteha Ho Gayi Intezaar Ki'.

© Copyright tellybest.com, 2018, 2019, 2020. All Rights Reserved. Unauthorized use and/or duplication of this material without written permission from tellybest.com is strictly prohibited.
Cached Saved on: Wednesday 28th of October 2020 01:45:15 PM