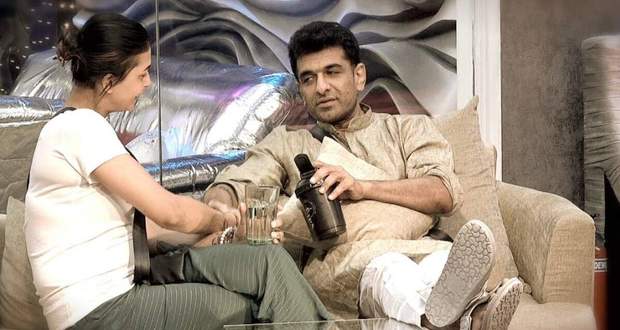 Hina Khan tells Eijaz Khan that maybe Pavitra Punia nominated him for Bigg Boss 14 elimination because she was jealous and possessive over him. She advises him to give her a second chance.

Eijaz tells Pavitra to hug him only when one of them is leaving the Big Boss 14 house due to which Pavitra gets upset.

Nikki Tamboli sits on Jaan Kumar Sanu's lap while he tells her to not advise him when there are other contestants as they later taunt him by saying that she is enticing him.

After a while, Jaan gives Nikki a neck and shoulder massage in BB mall's spa area and they gossip about other BiggBoss 14 contestants.

Gauahar Khan announces from the rule book that the nominations and immunity from previous elimination are invalid as the eviction is done and to get immunity from the next #BiggBoss14 elimination they will have to win a task named ' Mere Angne Me Tumhara Kya Kaam'.

In the BB 14 task, there are two teams, team A comprising of Jaan, Shehzad Deol, Jasmin Bhasin, Abhinav Shukla and Rubina Dilaik while team B comprises of Eijaz, Pavitra, Rahul Vaidya and Nishant Singh Malkani.

Both teams will have to make farmland in the garden area by getting land mats, grass mats and flowers from BB14 seniors. Nikki is given the power to coordinate the whole task and give the final verdict of the task.

During the task, Jasmin tries to steal Nishant's hidden land mats and in doing so they damage the property of  BiggBoss 14 house. Bigg Boss announces to put a halt to the task.

On Seniors Se Poocho Sawaal, Hina is asked that earlier she got famous during Bigg Boss 11 and now she is in BigBoss 14 as a senior, does she think there will be any twists? She answers by saying that she is grateful for the fame she got in BB11 and that twists are happening every day in the Bigg Boss14 house so anything can happen.

Jasmin accuses Nikki of being partial in her job of a coordinated and that she interferes in their teams matter only.

At 8 P.M., the task is put at the break for the day by Bigg Boss' announcement.

In the living room, Jaan tells Nikki that he wants to impress a girl outside of the Bigg Boss house named Nikki Tamboli. However, she gently rejects him by saying that she thinks of him as a 'Bhaijaan'.

Upcoming Bigg Boss 14 episode update: Rahul Vaidya and Eijaz Khan to do bromance to get flowers from Hina Khan in the immunity task.