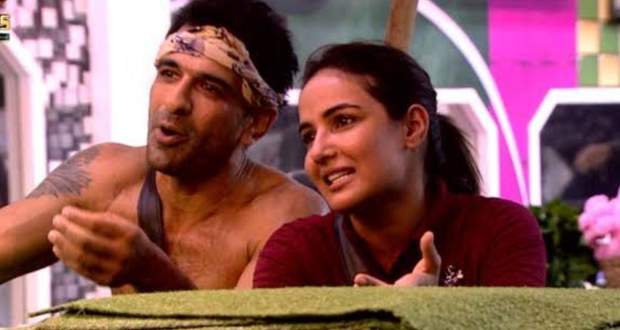 Eijaz Khan tells Pavitra Punia that he thinks that Bigg Boss 14 senior Hina Khan is more inclined towards the other team as they interact with her more.

Afterward in the bathroom, Rahul Vaidya funnily imitates everyone while Eijaz laughs with him and tells him their game plan.

Both the teams strategize their game plan for the BiggBoss immunity task throughout the morning.

Bigg Boss announces that the immunity task is going to starts and to play the task in a way such that no one gets physically hurt. The task begins at 3:45 PM.

Nikki Tamboli disqualifies Jasmin Bhasin but she participates in the task none the less. Nikki also swears at Shehzad Deol due to which they get into an argument. Nishant Singh Malkani and Shehzad get physical during the task and Big Boss again announces to not use physical strength.

Nikki swears at Jasmin during the task due to which she gets emotional and cries. She tells the camera that she did not come to Bigg Boss14 to get bad-mouthed on national television.BigBoss announces to stop the task immediately.

Shehzad and Nishant get into a cold war and Shehzad calls him a 'Hijda' due to which Rubina Dilaik gets angry. She tells Shehzad to apologize to the community immediately as that word is not an insult.

#BiggBoss14 task again starts at 5 PM with the announcement that Hina's flower shop is now open from that time onwards. Rahul and Eijaz dance together without their shirts on to get flowers from Hina.

Hina announces that she will give both the team's a basket of flowers if they set up their farmland.

BigBoss announces to tell Nikki to choose the winner of the immunity task. Nikki makes team B winner as she thinks that lilies only grow in the mud.

BiggBoss 14 announces that as mentioned before, the members of the winning team I.e. team A which are Eijaz, Pavitra, Rahul, and Nishant get immunity from this week's eliminations and the rest of the freshers get nominated for Bigg Boss 14 eliminations.

Upcoming BiggBoss 14 episode update: Nishant Singh Malkani to climb a tree in the next BiggBoss 14 task.

© Copyright tellybest.com, 2018, 2019, 2020. All Rights Reserved. Unauthorized use and/or duplication of this material without written permission from tellybest.com is strictly prohibited.
Cached Saved on: Saturday 28th of November 2020 10:33:20 PM