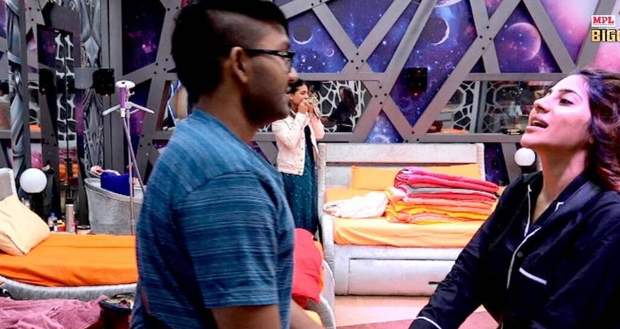 Today is the first time in Bigg Boss season 14 where the audience got to ask questions to the members inside the house.

BiggBoss 14 fresher Nikki Tamboli teases Jaan Kumar Sanu by calling him a brother and tells him that if he sings the song Haste Haste for her them she will consider him a friend. He sings the song for her and then she hugs him by saying that they are friends.

Big Boss 14 senior Gauahar Khan threatens Rahul Vaidya to cut the vegetables on time or she will lock up the kitchen area and he apologises to her by saying that it won't happen again.

Bigg Boss announces that the fourth round of the task for winning their items will be played between Abhinav Shukla and Jaan. Abhinav wins the task and gets his items.

Bigg Boss announces that the last round is to be played between Nikki and Jasmin Bhasin but due to Nikki being a confirmed contestant, she won't lose her items regardless of winning the task or not. They both tear each other's baskets and at last, the round ends.

The BiggBoss14 seniors are conflicted in choosing the winner which creates an argument between them. At last, after a lot of arguments, the seniors announce Jasmin as the winner.

Rubina Dilaik congratulates Jasmin and says that she is proud of women's power. Bigg Boss 14 senior

Sidharth Shukla rebukes her by saying that what does women power has to do with Jasmin winning the task. They get into a verbal fight and other seniors tell Sidharth that he misinterprets how she was saying.

BB 14 Seniors Hina Khan and Gauahar Khan advise Nikki not to swear so much as people are taking it negatively.

Gauahar announces from Bigg Boss14 rulebook about the next task named 'TRESemmé STYLE ICON' in which the Nikki, Pavitra Punia, Jasmin and Rubina will be given a title by Jaan, Eijaz Khan, Shehzad Deol and Rahul according to which they will have to style their hair.

The Big Boss task begins and the girls perform a ramp walk and the title givers introduce them to the Judges.

At the end of the task, the seniors all agree that Pavitra did the best and they announce her as the winner of the task and gives her the 'TRESemmé STYLE ICON' sash.

© Copyright tellybest.com, 2018, 2019, 2020. All Rights Reserved. Unauthorized use and/or duplication of this material without written permission from tellybest.com is strictly prohibited.
Cached Saved on: Wednesday 28th of October 2020 02:53:45 PM