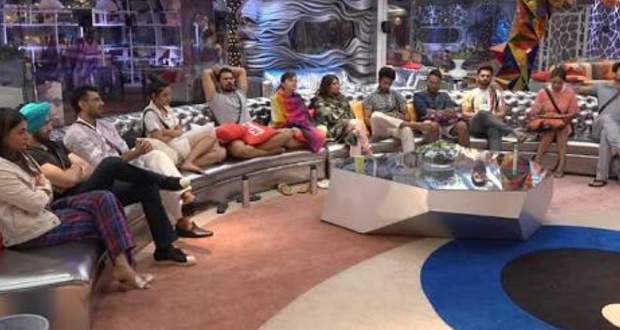 Bigg Boss 14 seniors Gauahar Khan, Sidharth Shukla and Rahul Vaidya converse among themselves that Abhinav Shukla and Rubina Dilaik took up the duty of cooking but don't chop the vegetables.

The BB14 seniors confront Rubina and Abhinav about it due to which they get into an intense argument. Rubina calls Sidharth unreasonable for suggesting Gauahar giving them the duty of chopping as they are already cooking for 13 people.

At last, BiggBoss14 seniors put out a rule that the person on cooking duty will chop the vegetables.

Meanwhile, Jasmin Bhasin is telling Shehzad Deol that she hates Nikki Tamboli for not playing fair in the personal items task and that she is waiting for an opportunity to get back at her.

Pavitra Punia has a verbal fight with Rahul as he kept interrupting her when she was talking to Nishant Singh Malkani earlier. Rahul fights back by saying that he will talk whenever he wants to and wherever he wants to.

After a while, Rahul, Jaan Kumar Sanu, and Nishant code-named BiggBoss 14 fresher girls so that they can talk about them without them giving it away and decide to give Pavitra codename Om.

Pavitra informs from the Big Boss 14 rulebook about the luxury budget task in which Rahul and Jaan will have to gather contestants as an audience by singing for them.

At the end of the BB 14 task, the singer who will have the bigger audience will win and get a BigBoss 14 Luxury Budget hamper. Japan wins the task and gets to share her hamper with 4 contestants which are Eijaz Khan, Nikki, Nishant, and Shehzad.

During the nighttime, Bigg Boss announces to BB14 freshers that they can decide whether or not Nikki should be a confirmed BiggBoss contestant. BiggBoss tells them to decide on their individual opinions and not by the majority.

During the discussion, Jaan tells her that she should keep her ego low. Rubina tells her that she has lost her humanity somewhere while trying to get attention. Senior Gauahar tells other seniors that she sees the potential to become the winner of Bigg Boss 14 in Rubina.

Bigg Boss14 asks for their decision and Eijaz states that they have not yet concluded as they have many different opinions on Nikki. Big Boss announces that as the freshers were not able to conclude, Nikki remains a confirmed contestant.

Nikki rebukes Jaan and Nishant for not telling her earlier that they had a problem with her behaviour earlier in the Bigg Boss house. She tells Jaan that she is known for speaking her mind. Jaan tells her that it would be better if they not be friends rather than her switching from friend to brother and brother to friend from time to time.