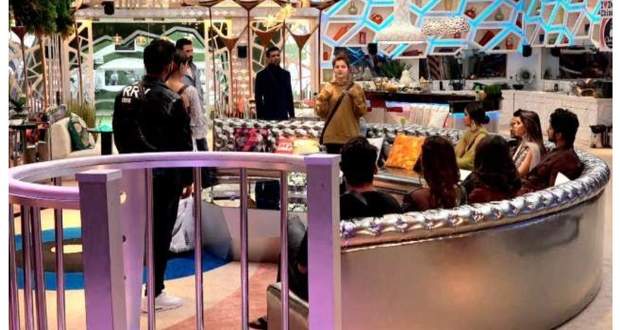 Today's Bigg Boss 14 18 Oct 2020 episode starts with Salman Khan greeting the audience and stating that from now on Big Boss 14 Weekend Ka Vaar will be on Sunday's and Monday's.

He tells the audience that Bigg Boss gave the BB14 freshers a task where they will have to give their opinion on who has more garbage in their head between Nikki Tamboli and Rubina Dilaik.

In the living area of BiggBoss house, Rubina is stating that she won't be taking part in the task as it is humiliating on her part and that she will also not be attending the Weekend Ka Vaar episode as she does not have any clothes.

The scene changes to everyone sitting in front of the screen and Bigg Boss 14 host Salman greeting them and proceeding with telling Rubina that it is her fault only that she could not get her clothes as Bigg Boss had given her many chances to win her items.

She further elaborates that she thought that the task for insulting for her and Salman says to her that the insulting hasn't even started yet.

He further explains to her that this task is for entertainment purposes and that she should play the Bigg Boss 14 game with an open mind. Later, Nikki and Rubina play the task where the majority of contestants vote for Rubina.

Subsequently, Salman asks Jaan about his relationship with Nikki and also says that #TamboRa is trending which stands for Nikki Tamboli and Rahul Vaidya.

He praises Nikki for fearless attitude, Jasmin Bhasin for being real, and Rahul for doing very good in the task by entertaining the Bigg Boss 14 audience. He says that extraterrestrial beings are particular fans of one contestant and show a video clip of Abhinav Shukla sharing trivia about random things at random times.

Thereafter, Salman gives them a task where he tells contestants to pick someone to clear out their differences. Firstly, Eijaz Khan calls upon Rubina and states that she maybe has a personal problem with him.

She tells him that his assumptions are correct and that she has a problem with him suggesting that Abhinav tried to pull up/tear-off Pavitra Punia's shirt in the Immunity task.

Jasmin calls Eijaz upon witness box and states that he physically intimidated her in the Mere Angne Mein task while Eijaz responded that it was a physiological tactic.

Lastly, Salman states that the Bigg Boss contestants in the bottom three for this week's elimination are Jaan, Shehzad, and Abhinav and the decision will be taken by none other than Bigg Boss 14 freshers. He bids goodbye and says that he wants the decision by tomorrow.