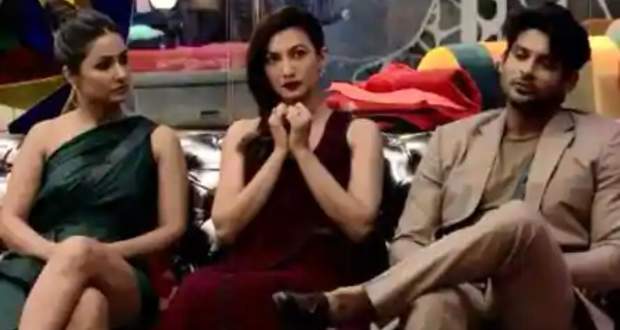 The scene changes to the Bigg Boss 14 house where Shehzad Deol and Jaan Kumar Sanu state his reasons to stay in the house in front of BB14 freshers. however, Abhinav Shukla just wishes everyone good luck in case he gets eliminated.

Salman greets the Big Boss 14 contestants and asks them to state their individual decision on whom they want to evict between Abhinav, Shehzad, and Jaan.

Everyone casts their vote by giving their reasons to choose them. The score is 4 for Abhinav and Jaan while Shehzad's score is 2.

Salman tells them that now there will be a twist in Bigg Boss 14 and now the decision will be in seniors hand. Gauahar Khan and Hina Khan vote for Shehzad and now the score is a tie between the three contestants while Sidharth Shukla votes for Shehzad and thus he is eliminated.

However, Salman tells Shehzad that he will not be going home today as he will be staying in the Big Boss14 house as a 'Gayab' contestant whose decisions will not be taken into consideration when making any major decisions of BiggBoss house.

Salman tells that the real game will from now on as the process from Bigg Boss To Be Confirmed to Confirmed will start from this week.

Salman Khan gives BiggBoss 14 freshers the task to choose one contestant they don't want to be confirmed and put foam on their faces. The majority of freshers put foam on Abhinav's face.

Thereafter, Salman gives Pavitra Punia a task to rate the boys of BigBoss14 house from 10 as she earlier stated that there were no good men in the house. Sidharth gets the highest score of 8.

Later, Salman tells Pavitra that there is a Bigg Boss 14 wildcard contestant sent only for her who is a real man and it is revealed that it the mannequin she kept hugging earlier in from BigBoss mall.

The Bigg Boss caller of Week asks Pavitra that earlier she was seen as a strong BB 14 contestant but now she seems quiet. why? She responds by saying that the house can be stressful sometimes and that that is why she can be seen as quite sometimes.

Salman gives the #BiggBoss14 seniors task to give their opinion on who they want to keep watching in the future and who they don't from the pair of contestants being called upon.

After the end of the task, Salman says that now it is time for BB freshers to choose the senior whose team they want to be in for the next 2 weeks.

© Copyright tellybest.com, 2018, 2019, 2020. All Rights Reserved. Unauthorized use and/or duplication of this material without written permission from tellybest.com is strictly prohibited.
Cached Saved on: Thursday 26th of November 2020 10:23:03 AM