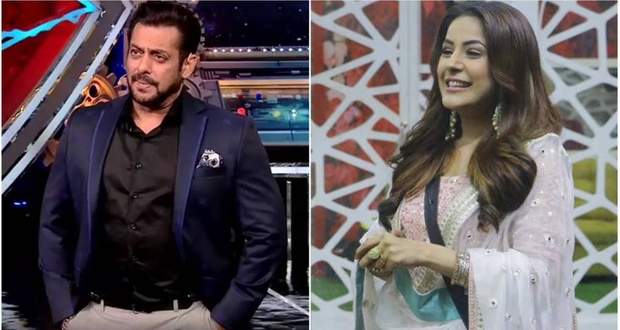 He tells Naina Singh to bring the sashes situated in the storeroom.

He starts calling out contestants names and tells them to choose one person to give the shash chose for them.

Salman asks Eijaz Khan his opinion on who's going to be eliminated from Bigg Boss 14 house and he answers by giving Nishant Singh Malkani's name.

Salman says that the fourth week is done and it's time for elimination but before that, there is a guest for them.

Jaan Kumar Sanu tells her that he has been a fan of her and has a crush on her for a long time.

Afterwards, she has a singing session with Rahul Vaidya and Jaan.

She tells them that she has a surprise for them and choose Shardul Pandit and tells him to bring the gift from the storeroom.

She tells him to unwrap it and give it the person he deems fit for the words written on the gift wrapper after which the gift passes through the contestants and ends on Abhinav Shukla.

He opens it and from it springs up a scare toy.

Salman gives the housemates a task to decide who is essential and who is nonessential from Eijaz and Kavita Kaushik and the task proceeds.

At the end of the task, Salman tells that Kavita has the most nonessential votes after which she brings up the incidents with Eijaz that happened during the pandemic.

Kavita and Eijaz get into an argument and the housemates also indulge themselves into the argument while Salman leaves.

Inside the Big Boss 14 house, many housemates are seen supporting Eijaz.

They talk about what would she do if she were a contestant in this season while she says that she likes the pair of Eijaz and Pavitra Punia the most.

She says that she has a special task for them and during the task, she asks them about the things they have noticed about each other.

Then, she calls upon Jaan, Nikki Tamboli and Rahul and says that she will ask the boys question about Nikki after which Nikki will say who is correct. Jaan wins this task.

Shehnaz tells Eijaz-Pavitra to give each other a chance and tells them that she has fixed a date for them after which she departs.

Salman informs the housemates that the nomination will happen tomorrow.

Inside the house, Bigg Boss tells Eijaz-Pavitra to go to the theatre area and he takes her in his arms and goes into the theatre where they enjoy their dates.

Meanwhile, Kavita is ranting out her frustrations.

© Copyright tellybest.com, 2018, 2019, 2020. All Rights Reserved. Unauthorized use and/or duplication of this material without written permission from tellybest.com is strictly prohibited.
Cached Saved on: Wednesday 25th of November 2020 04:11:09 PM