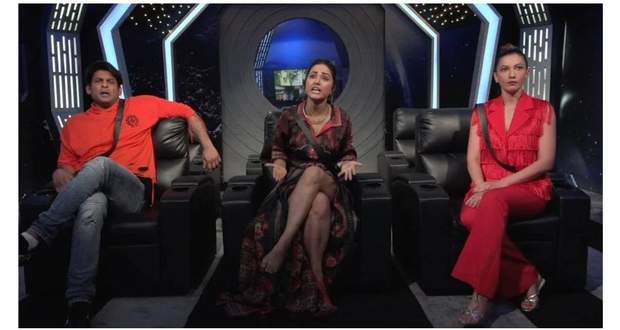 Abhinav Shukla advises everyone to redistribute the duties according to the time it takes to complete them. During the discussion, Eijaz Khan and Shehzad Deol get into a verbal argument while Pavitra Punia and Rahul Vaidya are seen dancing.

Jasmin Bhasin accuses Rahul of lying and stating that he is using his medical condition as an excuse to not do his duties.

Rubina Dilaik is called into the Bigg Boss 14 confession room where Bigg Boss tells her to speak up about what is it that's bothering her and she responds by saying that she did not like it when earlier Salman Khan called her husband Abhinav an object and that she can't work in an environment like this.

Thereafter, they are seen discussing it in the bedroom area while the Big Boss 14 seniors, Nishant Singh Malkani and Jaan Kumar Sanu are heard and then seen singing songs and having fun by the pool area.

Bigg Boss 14 Day 18 does not start with everyone waking up to a song but rather a loud buzzing sound while Bigg Boss announces that some of the contestants will be going home tonight from Bigg Boss14 house and to pack their bags.

The dong for the task alarms and the task starts which soon turns into chaos. After the second dong sounds indicating the end of the Bigg Boss task, Hina chants that they won while Gauahar is angry at Sidharth for not abiding by the rules as three of his team members were seen attacking while only two are allowed at a time.

The three seniors are being seated in the Bigg Boss Mall theatre area where BiggBoss shows them the footage and tells them to come to a decision. The three BiggBoss 14 seniors can't conclude as Hina and Gauahar accuse Sidharth's team to be cheating on the task.

Bigg Boss announced that the cheating is done by two teams.

© Copyright tellybest.com, 2018, 2019, 2020. All Rights Reserved. Unauthorized use and/or duplication of this material without written permission from tellybest.com is strictly prohibited.
Cached Saved on: Wednesday 25th of November 2020 05:06:17 PM