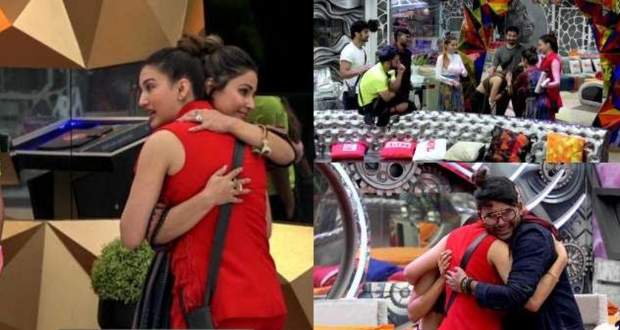 Today's Bigg Boss 14 21 October 2020 episode (continuation of Day 18) starts with Bigg Boss telling Seniors to give their individual opinion on the which team lose as they can't conclude.

All Biggs Boss 14 seniors give their individual opinion while arguing with each other. Hina Khan and Gauahar Khan vote for Sidharth Shukla's team.

The scene changes to everyone sitting in the living area and Bigg Boss announces that the game is over for Sidharth's team by the majority of votes.

Bigg Boss tells every that since Nikki Tamboli is accepted, except her Sidharth's team and Shehzad Deol have to leave the Bigg Boss14 house through the front gate. Everyone gets emotional as they depart while Nikki bawls her eyes out.

After some time, Bigg Boss thanks Hina and Gauahar for handling the house as seniors and that it is time for them to leave. The house once again gets emotions during their departure of Bigg Boss members to leave

Thereafter, Nikki is talking to Nishant Singh Malkani in bedroom area when there is suddenly a banging from the walls after which there are red lights and some people come in the house wearing PPE kits and sanitizing while one wallpaper of house is torn down and a room is revealed. Two people are left in the new room who are revealed to be Pavitra Punia and Eijaz Khan.

Bigg Boss announces that from now on the house has been divided into two zones from which the new room is red zone and the rest of the house is the green zone. The contestants in the red zone of Bigg Boss 14 will always be at risk for elimination.

Jaan Kumar Sanu tells Nikki to do her duties as everyone is a confirmed contestant now but Nikki refuses by saying that she will do it from tomorrow only.

Bigg Boss 14 Day 19 starts with everyone waking up to the song 'Beedi'.

Eijaz tells Nikki that he doesn't deserve to in the red zone just because the decision was taken by the majority.

Rahul Vaidya reads from BiggBoss 14 Rulebook about the task named 'Jaan Bachi Toh Laakhon Paye' in which the winner will be the captain of the house and will get some privileges.

The first round of the BiggBoss14 task starts and everyone pounds on a doll except their own as they can't pick up their own. After the buzzer sounds indicating the end of the round, Eijaz says that Rubina Dilaik was the last one to exit the Big Boss 14 house while Pavitra argues back by saying that Abhinav Shukla was the last one to exit due to which they get into a heated argument.

Rahul states that Pavitra has a crush on Abhinav and is protecting him due to this while Jaan is chanting 'Kiss! Kiss!' as Pavitra and Eijaz get too close during their verbal spat.

© Copyright tellybest.com, 2018, 2019, 2020. All Rights Reserved. Unauthorized use and/or duplication of this material without written permission from tellybest.com is strictly prohibited.
Cached Saved on: Monday 30th of November 2020 11:52:34 PM