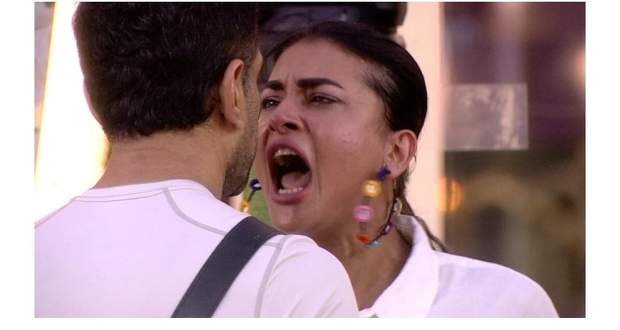 The fight between Pavitra and Eijaz continues and as a result, they can't agree on who was the last person to exit the Bigg Boss 14 dollhouse.

Bigg Boss asks for their final decision but they stay rooted to their own decisions and as a result, Big Boss announces that both the contestant's doll which came out last will be out of the game. Therefore, Jasmin Bhasin and Abhinav Shukla are out of the game.

The second round of starts and Rubina Dilaik is the last person in a dollhouse as there is only her doll which she can't take according to theBigg Boss14 rules.

Pavitra and Eijaz are trying to conclude the decision while Jaan, Nikki Tamboli, Nishant and Rahul Vaidya are deciding who wants to be the Bigg Boss house Captain and they get in an argument over it.

Nikki forfeits herself from the game while saying that at least Rubina's are not fake like her.

Jaan argues with her on the 'fake friends' statement and tells Nishant to take his doll and stay in the dollhouse cause he doesn't want to be Captain anymore.

The third round starts and Jaan runs with Nishant's doll and Nishant takes Jaan's doll and runs out of the dollhouse.

He is leaving Rahul and Rubina in the dollhouse with each other's dolls.

Rahul and Nishant argue over not following the strategy while Pavitra consoles a crying Nikki. Rahul walks out of the dollhouse leaving Rubina, Jaan and Nishant in the task.

The fourth round starts in which Rubina's doll is the last one leaving Jaan and Nishant in the task.

The fifth and last round starts and Jaan throws his doll in the corner and runs out with Nishant's doll making Nishant the Bigg Boss 14 task winner.

Thereafter, Rahul announces from the Bigg boss Rule book to BiggBoss14 members about the privileges and Responsibilities of Nishant as the first Captain of the house.

Later, Rahul tells Nikki that what she said today was not right due to which she gets emotional and runs to Pavitra in Red Zone.

Jaan goes after her into the Bigg Boss 14 Red Zone but she refuses to get out of the Red zone.

Bigg Boss tells Nishant to handle the situation as he is the Captain of the house.

© Copyright tellybest.com, 2018, 2019, 2020. All Rights Reserved. Unauthorized use and/or duplication of this material without written permission from tellybest.com is strictly prohibited.
Cached Saved on: Wednesday 2nd of December 2020 06:03:37 AM