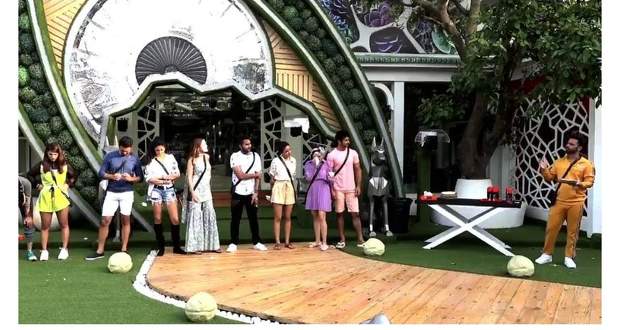 Today's Bigg Boss 14 26 Oct episode (Day 23)starts with Kavita Kaushik telling the Bigg Boss that she has to make others clean the BiggBoss house as it is dirty.

Kavita tells the Bigg Boss 14 contestants in the kitchen area that the house needs to be organised and reassigns their duties.

Bigg Boss warns Shardul Pandit that only one person can be in the smoking area at a time after which Kavita argues with him and Pavitra regarding the same issue.

Later in the Bigg Boss house, Nikki Tamboli tells Kavita that Rubina Dilaik is supposed to clean the bedroom area but it is still dirty as tissues are lying near her bed after which the three stated above get into an argument.

Bigg Boss 14 Day 24 starts with everyone waking up to the song 'Muqabala'.

After a little push from Kavita, Jaan Kumar Sanu tries to sort out his problems with Nikki.

Jasmin Bhasin and Rahul Vaidya get into a verbal fight regarding food portions served after with Rubina and Abhinav Shukla aide with Jasmin and also argue with him.

Jaan and Nikki again try to sort out their problems during which Nikki states that she doesn't want to talk to him in the future.

Jaan is smoking in the smoking area while Nikki comes there and demands him to get out and not smoke anymore for the day after which they bicker.

At the end, they make up and Jaan gives her a peck on the cheek.

Halfway into the day, Bigg Boss announces that now it is time for Big Boss 14 nomination task and tells the contestants to nominate two contestants by putting foam on their face except Kavita, Eijaz Khan and Pavitra Punia as the former is the captain while the latter are already nominated.

During the task, Rahul nominates Jaan with the statement that he hates nepotism and that he is here only because of his father after which many of the contestants rebuke him for using that particular word.

The task ends and Big Boss announces that Pavitra and Eijaz have one vote combined and tells them to nominate one contestant.

Later, Pavitra comes out of the Bigg Boss 14 Red zone and puts foam on Rahul's face and thus nominating him.

Bigg Boss announces Nikki, Jaan and Rahul as nominated contestants along with Eijaz and Pavitra.

There is a twist in Bigg Boss 14 episode as Bigg Boss gives Captain who is Kavita a privilege to save one nominated contestant from eliminations and she chooses Eijaz.

Lastly, Big Boss tells Eijaz to come out of the Red zone as he is saved and Nikki, Rahul and Jaan to enter the Red zone.

Nikki reveals to Rahul that she felt hurt by Jaan's actions today.

© Copyright tellybest.com, 2018, 2019, 2020. All Rights Reserved. Unauthorized use and/or duplication of this material without written permission from tellybest.com is strictly prohibited.
Cached Saved on: Tuesday 1st of December 2020 11:49:59 AM