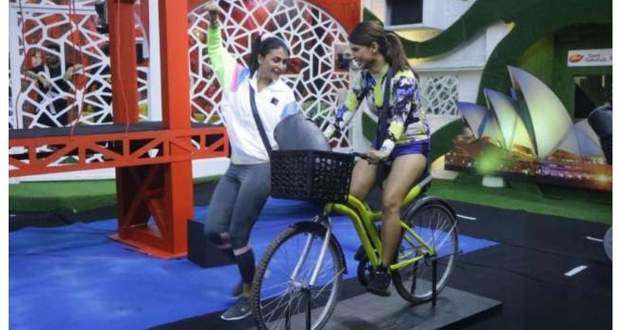 Today's Bigg Boss 14 27 October 2020 episode starts with everyone sitting together and stating the duties they are given.

Nishant Singh Malkani and Rahul Vaidya are arguing about yesterday's nomination incident while Jaan Kumar Sanu meddles in it after which he and Rahul start calling each other names.

Rahul calls him a girl due to which many Big Boss 14 contestants disagree and rebuke him for using the word girl as an insult.

After the end of the argument, Jaan tells Nikki Tamboli to not support Rahul's wrongdoings and to be on either his side or Rahul's side.

Kavita Kaushik is called into the Big Boss confession room and is told to make everyone go to the garden area and to close the lid on all the cooked food.

Kavita and Shardul Pandit argue while she tells everyone to go to the garden area.

Rahul instigates Jaan by again talking about his father and they get into a violent fight after which Pavitra Punia warns Rahul not to get physical.

Later, she cries into Eijaz Khan's arms while he tries to console her.

Bigg Boss Day 25 starts with everyone waking up to the song 'Made In India'.

Nikki and Jaan have an argument after which she is seen complaining about it to Rahul and sitting with him.

In the Big Boss green zone, Eijaz tells the Contestants sitting at the dining table to close the caps of Hygiene related items after which Nishant argues with him regarding his choice of words.

Rubina Dilaik reads from the Bigg Boss14 rulebook that Kavita luckily became the Captain of the house but now it is a chance for other Contestants to win the title of Captain in the task named 'Bigg Boss world tour' in which the contestants will have to save their travel bags from being stolen or snatched from the BiggBoss nominated contestants.

The winner will become the next Captain of the house.

There will no coordinator at the start but the first contestant to lose in the task will become the coordinator for the rest of the task.

The first world tour starts after which Pavitra takes three kisses from Eijaz as a bargain to not take his travel bag.

Naina Singh's bag is taken by Nikki due to which they get into a heated argument and at last the latter announces Naina as the coordinator.

Rahul tries to snatch Jasmin Bhasin's travel bag but it brakes and the strap is left in Jasmin's hand while Rahul takes the left of it.

Jasmin has a breakdown and says that Rahul threatened her with physical harm and calls him many names.

Jasmin splashes water at him.

© Copyright tellybest.com, 2018, 2019, 2020. All Rights Reserved. Unauthorized use and/or duplication of this material without written permission from tellybest.com is strictly prohibited.
Cached Saved on: Tuesday 1st of December 2020 02:06:53 AM