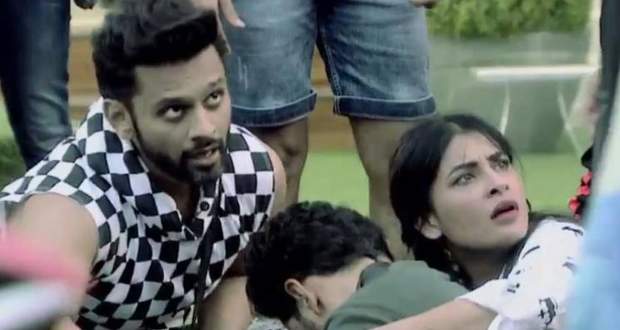 Today's Bigg Boss 14 28 Oct 2020 episode (continuation of Day 25) starts with Jasmin Bhasin splashing water at Rahul Vaidya after which both Red and Green zone have a verbal spat.

Rubina Dilaik supports crying Jasmin by saying that splashing water at him was not wrong while Jasmin swears at him.

Jasmin says that the fight is about intention and not about action while Rahul says that she is just acting.

At 8:45 PM, Bigg Boss announces that the task for today is over and tells Naina to put the still participating contestants travel bags in the storage room.

The scene changes to Rahul getting emotional while Nikki consoles him.

Red zone contestants are discussing among themselves while Jaan Kumar Sanu announces that he wants to play individually.

Jaan and Pavitra Punia are seen having a late-night talk about her feelings for Eijaz Khan.

Bigg Boss 14 Day 26 starts with everyone waking up to the song 'Gungharoo'.

Jaan is seen telling their game plans to Nishant and warning Abhinav Shukla that Rahul is going to take his travel bag in the next round.

Kavita and Rubina have an argument regarding fruit cutting.

Nikki tells Eijaz that Pavitra has become attached to him while he states that he does not have any feelings for her.

Pavitra gives Eijaz food made by her own hands.

Big Boss announces that the task timings for today are open and the rules are the same as yesterday but instead of one, two contestants will be out in a single round.

Jaan is seen sitting in the confession room and BiggBoss tells him that Marathi community is displeased with him due to him saying something a few days back after which he apologises to the Marathi community and the Bigg Boss show.

The fourth world tour starts and Jaan is seen discussing with Eijaz but at last, leaving from there without taking his travel bag.

Rubina and Kavita's travel bags are taken by the end of the round.

Nikki leaves the Red zone and takes Abh8nav's travel bag while Naina tells her to put it back but she refuses.

BiggBoss14 tells Nikki that travel bags can't be taken in between two rounds after she gives the travel bag back to Naina.

The fifth world tour starts and Pavita and Rahul are seen trying to snatch Abhinav's travel bag together.

© Copyright tellybest.com, 2018, 2019, 2020. All Rights Reserved. Unauthorized use and/or duplication of this material without written permission from tellybest.com is strictly prohibited.
Cached Saved on: Thursday 26th of November 2020 10:17:30 AM