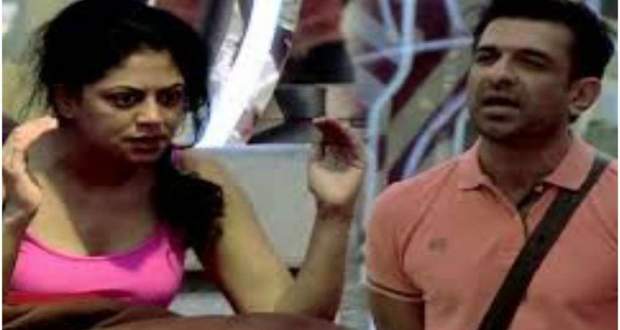 Today's Bigg Boss 14 29 Oct 2020 episode starts with Naina Singh telling Nikki Tamboli that she is disqualified however the latter refuses.

The Big Boss 14 fifth world tour starts and Rahul Vaidya takes Eijaz Khan's travel bag but does not put it inside the Red zone.

Rahul tries to snack Abhinav Shukla's travel bag while Naina stops them and refuses to let his bag taken away.

Bigg Boss tells Naina that neither she nor other contestants are allowed to interfere with the task.

Rahul and Pavitra together try to snatch Abhinav's travel bag while Bigg Boss tells them to stop and tells Red zone residents to decide who's Travel bag they want to take from Eijaz and Abhinav.

They decide to take Abhinav's bag.

Later, Rahul is seen apologizing to Jaan Kumar Sanu stating that he didn't know about their parent's separation while Jasmin Bhasin is seen crying and Rubina Dilaik is trying to console her.

The scene changes to everyone sitting in the living area and Bigg Boss asking Naina whose bag is not in the Red zone to which she replies by Einaz's name.

Bigg Boss announces Eijaz as the winner and the new Captain of the Big Boss 14 house after which the Red zone contestants are seen congratulating him.

Naina is seen crying while Eijaz and Jasmin try to console them.

Rubina is seen telling Abhinav that the decision will be favoured in the Bigg Boss 14 TRP gaining contestants and tells him to not take it personally.

Kavita Kaushik tries to convince Eijaz to pursue a relationship with Pavitra but he refuses by saying that if he will be in a relationship, then his decisions will be biased.

Eijaz argues with Kavita due to her not wearing her mic after which the fight gets intense and Kavita questions their relationship and says that he is just using her.

Pavitra gets angry at Kavita and says that she is a two-faced liar.

Kavita and Eijaz are still fighting in the bedroom area.

After some time, Kavita is seen telling others that she and Eijaz are not friends while the contestants revel that their thinking was of them being best friend's.

Bigg Boss season 14 Day 27 starts with everyone waking up to the song 'Zingaat'.

Everyone is standing in line in the garden area while Bigg Boss tells everyone that there is a twist in the game and says that Eijaz has the opportunity to change the whole game.

He announces that it is time for Transfer and tells Redzone residents to nominate one contestant from the Green zone and state why they are better than them and tells that Eijaz will be one to decide if they stay in their zones of the swap.

First up is Nikki who chose Kavita and Eijaz presses the Swap button.

© Copyright tellybest.com, 2018, 2019, 2020. All Rights Reserved. Unauthorized use and/or duplication of this material without written permission from tellybest.com is strictly prohibited.
Cached Saved on: Thursday 26th of November 2020 10:07:47 AM