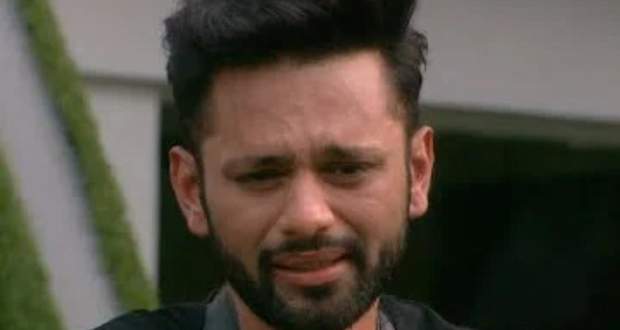 Eijaz Khan and Nikki Tamboli go to the BBMall and gossip while Nikki takes a Nightwear and flaunts it to the housemates.

The Cuckoo Do Ko sounds and Pavitra Punia sits up and tells that she was lying down because she is having back pain after which Eijaz gives her a back massage.

Jaan Kumar Sanu argues with Eijaz as he could not get access to BBMall even after requesting him for 3 days.

Eijaz gives Abhinav Shukla access to BBMall for 1 day in exchange for getting a haircut.

Nikki-Jaan fights with Shardul Pandit-Rahul Vaidya for them no putting the utensil in place after washing them while Pavitra interferes.

Bigg Boss announces that it is time for nomination and gives Eijaz the privilege to save one contestant from nomination.

Bigg Boss tells them that he will call two housemates at random and the housemate to have the oxygen mask at the end of the round will be safe while the other will be nominated and will have to go to the Red zone.

However, if at the end of the round, anyone contestant will not have the oxygen mask then both will be nominated.

If there are four people in the Red zone before the end of the task then the task will be over immediately.

The round ends and housemates support Rahul who is crying and rebuke Nikki for doing such a thing after which Bigg Boss tells Rahul to go to the Red zone.

The second round is between Shardul and Naina Singh in which they both state their decision after which they did to go to the Red zone together.

Pavitra gets emotional due to Eijaz not choosing her for safety from elimination and tells Nikki that she will go happily in the Red zone without any debate.

The third round is between Rubina Dilaik and Abhinav and they both try to convince each other to take the oxygen mask and in the end, Abhinav takes the oxygen mask.

Bigg Boss says that the nomination task is over and states the nominated contestant's names.

Nikki tells Jaan to not kiss her anymore after which he questions her as to why is she acting weird.

Jaan and Eijaz get into a fight.

Eijaz tells Pavitra to change her batteries but she doesn't after which Bigg Boss tells her and she does.

© Copyright tellybest.com, 2020, 2021. All Rights Reserved. Unauthorized use and/or duplication of any material from tellybest.com without written permission is strictly prohibited.
Cached Saved on: Saturday 23rd of January 2021 11:06:10 AMCached Disp on: Tuesday 26th of January 2021 02:47:32 PM