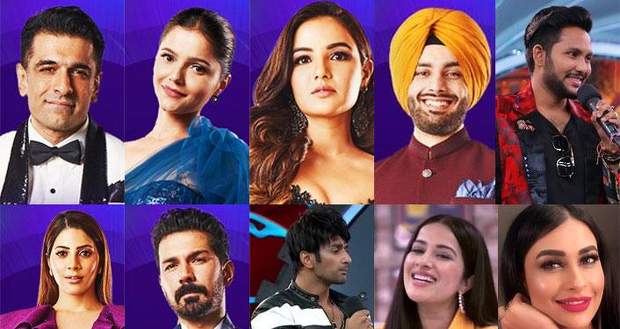 The rules of the BiggBoss 14 are announced. Siddharth Shukla oversees the bedroom, Kitchen by Gauhar Khan and Hina Khan for personal belongings.

The conversation continued about Covid19 and how everyone went through virus testing, social distancing, and quarantine.

The BigBoss 14 'Toofani Seniors' Sidharth, Gauahar, Hina are the first ones to enter into the Bigg Boss season 14 house.

The first contestant of Bigg-Boss 14 Eijaz Khan enters the house with an amazing dance performance.

The second Big-Boss 14 contestant Nikki Tamboli gets a warm welcome from both Salman & Eijaz and Salman teases her connecting with Eijaz.

The first task of BigBoss 14 was to find a medal that was won by Nikki.

The seniors give a task to Nikki and find her very promising but her BiggBoss house stay can only be confirmed after 2 weeks.

A married couple of Bigg Boss is Rubina Dilalk and Abhinav Shukla is already confirmed to stay in the house.

The next contestant Nishant Singh makes the entry and praises Salman Khan.

Shehzad Deol is the next Bigg-Boss house entrant who says he is well prepared to survive longer in the bigg boss game.

Sara Gurpal enters next into the BB14 show.

Jaan Kumar Sanu also makes the entry but gets into the rejected list of contestants.

Radhe Maa enters into BB 14 house with Maa avatar and offers blessing to everyone.

The chocolate boy Rahul Vaidya enters the BB house next with another song performance.

Upcoming Bigg Boss 14 episode update: More of the latest gossips, new spoilers, and twists of Bigg Boss 14 to follow in the next episodes.