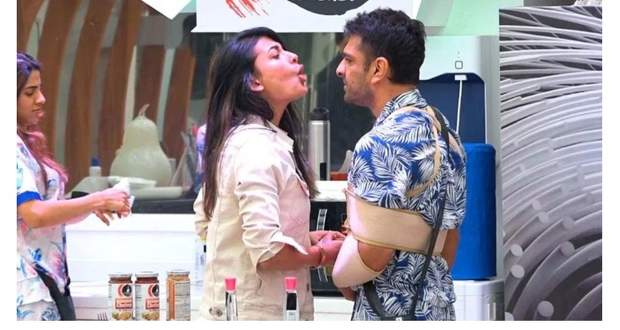 Eijaz Khan talks about his past injuries to Abhinav Shukla while Jasmin Bhasin tells him to talk about the past fame that he had.

Eijaz tries to talk to Pavitra Punia but she tells him to not speak to her after which they into a very heated argument and Pavitra calls him a chameleon.

During the fight, Pavitra hits him after which Nikki takes her to the garden area where she announces she stood up for him when no one else did and that he's a captain only because of her.

Jasmin intervenes in the fight and tries to convince both of them to not fight anymore.

They both again get into a verbal fight.

Jasmin goes to Pavitra and the latter tells her the reason for her outburst.

A curtained area is revealed with a landline near it.

The song 'Soneha' starts and the curtain goes up revealing Aly Goni.

Bigg Boss announces that the power of friendship brought Aly to the Bigg Boss house for Jasmin and welcomes him as a new contestant.

Bigg Boss gives Jasmin the privilege to make decisions for the day after discussing with Aly.

Jasmin and Aly talk to each other during which the latter tells her that he feels bad for Pavitra and he talks to her about the same after which Eijaz tells him his reason for saving Jasmin.

Pavitra reads from the Bigg Boss 14 rulebook about the next captaincy task in which the housemates will act like plants of the solar system and will revolve around the sun in the garden area in which the last one standing will be the winner.

Red zone residents will ask as coordinators and also astroids who harm the planets after which he tells Eijaz to choose a substitute for him as he can't participate due to medical issues. He chooses Shardul Pandit.

The housemates strategize their plan while Shardul says that he will give his hundred percent due to which Pavitra gets angry.

The first round starts and Naina Singh is the coordinator for the round in which Nikki loses.

Jasmin and Abhinav discuss with Aly after which they decide to out Shardul in the next round and adds Pavitra to their plan.

Shardul is outed in the next round.

Rubina Dilaik is the coordinator for the next round while Nikki and Jaan are distracting Abhinav and Jasmin due to which Abhinav stumbles and touches the ground.

Bigg Boss asks for Rubina's decision and she announces the task is still going on as Abhinav was distracted by the outed contestant.

Pavitra pushes Abhinav and he is outed from the task.